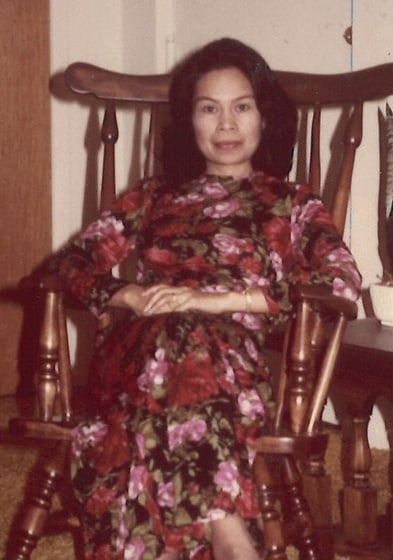 Erlina B. Criswell, age 87, of Chappell, NE, passed away peacefully on Sunday, November 6, 2022, in Oshkosh, NE.  A Mass of Christian Burial will be held at 10:30 A.M. Monday, November 21, 2022 at St. Joseph’s Catholic Church in Chappell, NE Father Joe Hannappel and Deacon Dixon Powers officiating.  Visitation will be held at the church from 9 AM until service time.  Interment will be in the Chappell Cemetery.  Services will be livestreamed on the Gehrig-Stitt Chapel Facebook page and recorded for later viewing on our website.

Memorials can be made in Erlina’s name to the Michael J. Fox Foundation at https://give.michaeljfox.org.

You may view Erlina’s Book of Memories, leave condolences, photos and stories at www.gehrigstittchapel.com.

She was born on October 25, 1935 in the Philippine province of Camarines Sur.  Erlina was the sixth of eleven children born to Domingo and Cipriana Baybay.  She and her family miraculously survived the Japanese occupation during WWII.  Catholic education was an integral part of her life.  She was a proud graduate of St. Agnes Academy in Legazpi City, Albay, Philippines.  Erlina continued her education at the University of Santo Tomas in Manila where she earned a bachelor’s degree in social work.  This allowed her to pursue her passion of helping children and families.  She worked for the Philippine Tuberculosis Society and Foster Parents Plan in the Philippines.

In 1969, Erlina ventured to Canada.  It was quite a change to leave the heat and crowds of Manila, but she embraced the change and even learned how to drive in the challenging Canadian winters.  She became a caseworker with the Oxford County Children’s Aid Society in Woodstock, Ontario, where her work centered around child welfare and adoption.  Not long after arriving in Canada, Erlina met Jerome Criswell.  Jerome was working as a faculty member at the nearby University of Guelph. They were united in marriage in St. John’s Catholic Church in Guelph, Ontario, on June 23, 1973.  After her husband’s project at the university was completed, the couple moved to Newark, DE, where Jerome worked for DuPont.  On July 9, 1975, their daughter Marsha Celine was born.

In 1976, Erlina moved with her husband and daughter to Chappell, NE to join the Criswell family’s farming operation.  During her time in Chappell, Erlina was active in St. Joseph’s Catholic Church where she taught catechism, led the legion of Mary, served as a eucharistic minister, and baked countless goodies for the annual Fall Bazaar.  She also volunteered at the nursing home, was an active member of the Social Hour Club and made sure everyone working at the farm was well fed during wheat harvest.

She was preceded in death by her parents and siblings, Virgilio, Celina (Sr. Maria Walburga, Order of St. Benedict), Lea, and Lorenzo and in-laws Wilbur and Evelyn Criswell.

Erlina was a caring and devoted wife, mother, grandmother, sister, daughter and friend.  She brought a smile to everyone who was fortunate enough to be in her presence.  She will be deeply missed by family and friends in the United States, Canada and the Philippines.