Huskers Succumb to No. 9 Hokies

Nebraska's Isabelle Bourne notched a double-double with 15 points and 12 rebounds, but No. 9 Virginia Tech jumped to an early lead and pulled away late with an 85-54 women's basketball win over the Huskers .
Thursday, December 1st 2022, 8:57 PM MST
Friday, December 2nd 2022, 3:08 AM MST
By NU Athletic Communications 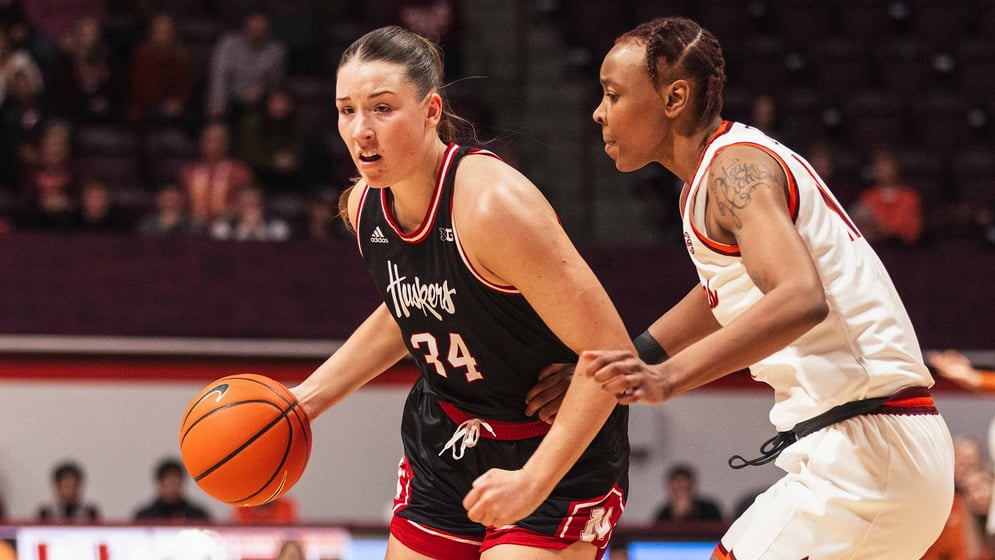 BLACKSBURG, Va. -- Nebraska's Isabelle Bourne notched a double-double with 15 points and 12 rebounds, but No. 9 Virginia Tech jumped to an early lead and pulled away late with an 85-54 women's basketball win over the Huskers at Cassell Coliseum on Thursday night.

Nebraska slipped to 5-3 with its second loss to a top-20 team on the road this season, while the Hokies improved to 7-0.

Annika Stewart added double digits for Nebraska in the scoring column with 10 points - all in the second quarter - but no other Husker scored more than seven points.

Georgia Amoore led Virginia Tech with the first triple-double in Hokie women's basketball history with 24 points and career highs of 10 rebounds and 11 assists. Elizabeth Kitley, the 2022 ACC Player of the Year, added a double-double with 24 points and 12 rebounds, including a 7-for-8 shooting effort in the second half. Taylor Soule put three Hokies in double figures with 18 points.

The home-standing Hokies jumped to a 21-8 lead after the opening 10 minutes, as the Huskers hit just 4-of-16 shots from the field, including 0-of-4 three-pointers.

Nebraska fought back in the second, winning the quarter 16-14 behind the strength of Stewart's 10 points off the bench. The Huskers were also in position to win the third period, trimming the Virginia Tech lead to 52-42 on an Alexis Markowski three-pointer with just over 30 seconds left.

But Amoore closed the quarter with a three-pointer to put the Hokies back up by 13 heading to the final period. Virginia Tech put an end to any Husker comeback hopes by scoring the first 17 points of the fourth quarter, including seven from Amoore, six from Kitley and four from Soule in the first 4:36 of the period to put the Hokies up 72-42.

Maddie Krull finally put a stop to the Hokie run with a reverse layup and finished with seven of Nebraska's 12 points in the quarter. But Virginia Tech finished with a 30-point fourth quarter to close out the victory.

Nebraska returns to road action against another top-20 opponent on Sunday, when the Huskers face No. 20 Maryland in their Big Ten Conference opener. Tip-off between the Huskers and the No. 20 Terrapins is set for noon (CT) with a live video stream by B1G+. The live radio call of Matt Coatney and Jeff Griesch will also be available on the Huskers Radio Network. The Terps knocked off No. 7 Notre Dame in South Bend, 74-72, on Thursday night.