The Nebraska baseball team fell 4-3 at Omaha after surrendering a walk-off single in the bottom of the ninth on Sunday afternoon at Tal Anderson Field in Omaha.
Sunday, March 13th 2022, 8:26 PM MDT
By NU Athletic Communications 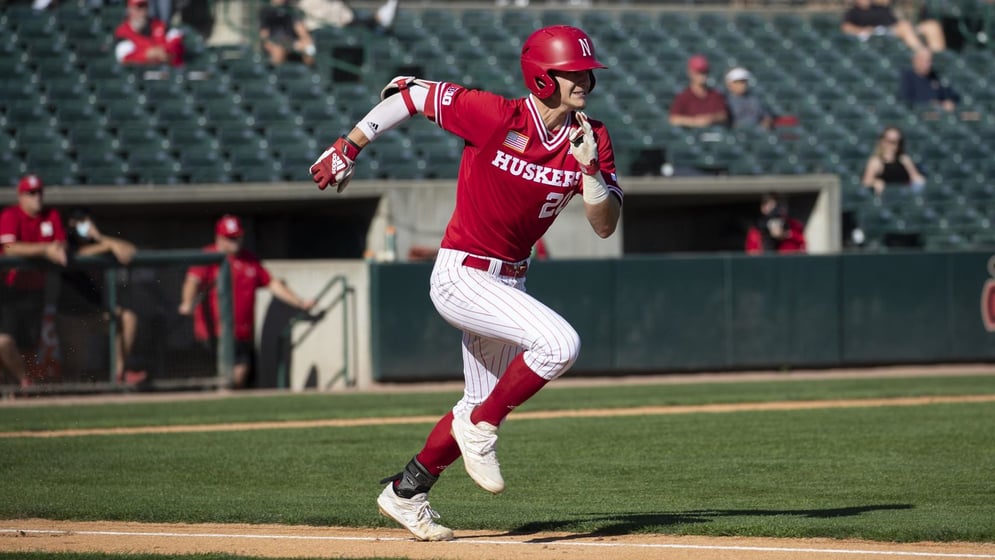 The Nebraska baseball team fell 4-3 at Omaha after surrendering a walk-off single in the bottom of the ninth on Sunday afternoon at Tal Anderson Field in Omaha.

Nebraska scored three runs on three hits and had one error, while the Mavericks scored four runs on six hits and committed two errors.

Koty Frank tossed five innings, allowing three runs, two earned, on three hits and struck out four Mavericks. Kyle Perry dropped to 0-2 on the season after allowing one run on three hits in 3.1 innings of relief.

Core Jackson went 2-for-4 at the plate with his first career home run and a career-high three RBI. Brice Matthews hit a double, while Josh Caron scored a team-high two runs.

The Huskers opened the scoring in the second when Jackson ripped a one-out RBI single to center, plating Caron. Caron reached on a one-out walk and stole second before coming around to score.
The Mavericks had the bases loaded in the bottom of the second, but Frank was able to get out of the jam with a strikeout.

Omaha scored three runs on a pair of hits and a Husker error in the third to grab a 3-1 lead. A leadoff double, followed by a Nebraska error on the Mavericks' sacrifice bunt attempt tied the game at one before Mike Boeve drilled a two-run homer to left center.

Caron reached on a two-out error by the Maverick shortstop in the sixth, followed by Jackson's two-run shot to right center to tie the game at three.

Caron began the top of the ninth with a walk, while Tyler Palmer replaced Caron in a pinch-running appearance. With two outs, Palmer stole second and advanced to third on an errant throw from the catcher, but the Huskers couldn't get Palmer home to score the go-ahead run.

Omaha's Jack Lombardi hit a one-out double to left center, followed by Harrison Denk's RBI single to right center to clinch the 4-3 win for the Mavericks.

The Big Red and Omaha take the diamond again tomorrow in Nebraska's home opener. First pitch between the Huskers and Mavericks is set for 1:05 p.m. at Haymarket Park. Anyone wishing to attend tomorrow's home opener, including season ticket holders, need to purchase tickets at huskers.com/tickets beginning on Monday at 8 a.m.

Box Score Olivia Ferrell tossed a shutout and Nebraska slugged two home runs as the Husker softball team picked up its fourth win of the weekend with a 9-0 victory over Long Beach State Sunday afternoon at the LBSU Softball Complex. Ferrell (9-3) was brilliant in the circle while tossing her third career shutout. She fanned 10 batters, matching her career-high. With the Huskers fourth win of the weekend, Nebraska moved to 15-7 while Long Beach State fell to 9-14. Multiple Huskers made an impact on offense. Billie Andrews led the Big Red with 5 RBIs including a home run and a triple while Mya Felder notched a deep homer over the left field fence. Cam Ybarra added a triple of her own, her second of the day after hitting one in the first game against UCF, and Sydney Gray added a double. Nebraska took the 1-0 lead in the third inning. Brooke Andrews and Ava Bredwell each hit singles to put runners on first and second. Billie Andrews hit a single to center field, scoring Brooke Andrews. Cam Ybarra reached first on an error to load the bases. NU ended the inning with bases loaded but were able to take the 1-0 lead. The Beach recorded their first hit in the bottom of the third inning with a single to right field. Long Beach State was not able to take advantage of it however as the Huskers recorded a ground out and Ferrell's sixth strikeout of the game to get out of the inning. NU extended their lead to 4-0 in the top of the fifth. A lead off walk put Ava Bredwell on first. Cam Ybarra smashed a triple down the right field line, scoring Bredwell. Sydney Gray followed it with a double, scoring Ybarra. Courtney Wallace added the third hit on the inning with a single to center, scoring Gray to make it a 4-0 game. Billie Andrews added another homer in the top of the sixth inning with a deep ball over the right field fence for her 14th on the season. The Huskers extended their lead 5-0. Mya Felder added to the home run total with a smashed ball over the left field fence to add another run for the Huskers making it 6-0. A single from Wallace, a hit by pitch from Kinney and a walk for Bredwell loaded the bases for Billie Andrews to hit a triple deep to center field, making it a 9-0 game. The Huskers will travel to Lawrence, Kan., next weekend for the Rock Chalk Challenge. NU will take on Tulsa on Friday, March 18 at 10 a.m. followed by a game against South Dakota at 12:30 p.m. On Saturday, March 19, the Big Red will see Tulsa for a second time at 12:30 p.m. and then will face tournament host Kansas at 3 p.m. Nebraska will finish the weekend on Sunday, March 20 at 10 a.m. against South Dakota. All game times are listed in central time zone and will be broadcasted live on Huskers Radio Network and Huskers.com with the call from Nate Rohr. Game Notes