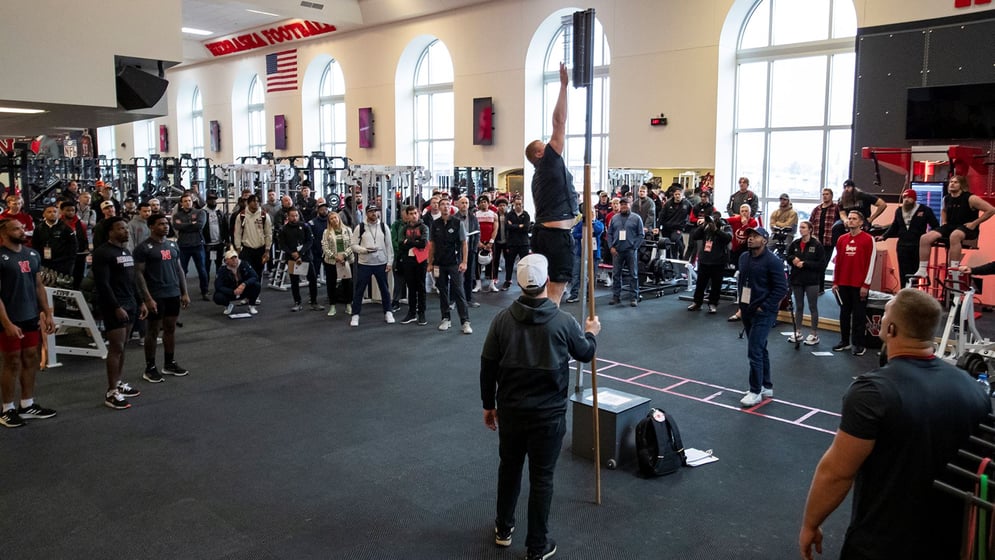 Cameron Jurgens does the vertical jump test during 2022 Pro Day.

The group went through a battery of physical tests as well as positional drills on the indoor turf. Fans can watch a reply of the field work on Huskers.com , as well as a photo gallery from the day.

"We will talk about the weather situation we had today," Busch said. "I have learned from golfers if you get a rainy day you go out there and play. Today we had moisture and we had really high winds. It was probably a little bit harder on them because we did it on the practice field so there is no stadium blocking but today we did everything. We did kickoff into that wind and into that cold and into the snow.  Then we did punts into it and we did it with it. We also kicked field goals and extra points with it too. It was a good mental challenge for them. Every opportunity we get with weather we are always going to use it. Guys handled it really well. They were excited about doing it so we got good work with it."

Busch discussed the special teams mentality he is pushing.

"For those guys it is fourth down every time," he said. "They only play on fourth downs. That is a dicey situation and there is not a lot of do-overs. If you throw an incomplete pass on second and 10 and it is just third and 10. You still have chance but in special teams you do not get a double down so everything is a fourth down. I put a fourth and one mentality in them every day."

He also emphasized the importance of possessing the ball during special teams.

"I tell them after every punt return or every kickoff return there is going to be two signals by the referee," Busch said. "It is either going to be touchdown Nebraska or first down Nebraska. That is it. We are going to possess the ball and that is the number one thing we have to have happen before we even worry about returns. Possess the ball. If we have the ball we can score. If we do not have the ball we can not. We talk about that real heavily."

The Huskers will continue their spring practice on Thursday. The annual red-white spring game is set for April, 9 at 1 p.m. (CT) with national television coverage by the Big Ten Network.

Huskers Ready for No. 25 Stanford

The Nebraska softball team (19-9) is set to host No. 25 Stanford this Wednesday, March 23, in Lincoln, Neb. The game is set to start at 4 p.m. at Bowlim Stadium.
The Huskers are coming off of a 4-0 weekend at the Rock Chalk Challenge. On Saturday, Nebraska faced Tulsa in game one. Freshman Ava Bredwell lifted the Huskers to a 7-6 win over the Golden Hurricane in eight innings. Bredwell hit a timely home run in the eighth inning to drive in two runs. The Huskers also faced South Dakota on Saturday. Anni Raley and Billie Andrews each notched a homer in the bottom of the fourth inning to help the Big Red to a 3-1 win.
On Sunday, NU faced South Dakota in game one. Abbie Squier powered the Huskers to a 9-3 win after homering twice and driving in three runs. This marked Squier's first multi-homer game of her career and her three RBIs were a career high. Caitlynn Neal added a single, double and triple against the Coyotes, tallying 4 RBIs. Nebraska finished the weekend with a win against Tulsa. Courtney Wallace pitched her first complete-game shutout of the season, holding Tulsa to five hits for the 3-0 win.
Stanford (20-6) is coming off a two-game losing streak after falling to No. 14 Northwestern and No. 18 Missouri at the Mizzou Classic. The Cardinal opened the weekend with a win against Ball State and an eight-inning victory over No. 18 Missouri.
On offense, Sydnee Huff has a batting average of .383. She has 31 hits, five doubles, four triples and one home run. Emily Young leads the team in RBIs with 26 on 31 hits, six doubles, three triples and two home runs.
Taylor Gindlesperger holds the highest batting average on the team with a .449. The senior has tallied 31 hits through 21 games and 13 RBIs.
Alana Vawter leads in the circle for Stanford with a 11-3 record and a 1.84 ERA. Vawter was named to the All-Pac-12 First Team and Freshman Team in 2021. She was also named a NFCA Schutt Sports Freshman of the Year finalist. Vawter was 22-11 on the season with a 1.54 ERA.
Regan Krause also is a leader in the circle, tallying six victories and only one loss so far. Krause holds a 1.33 ERA, giving up only 29 hits through 47.1 innings and striking out 39. Krause ranked in the top 10 in the PAC-12 in wins, innings pitched ERA and strikeouts during the 2021 season.
In 2021, the Cardinal finished the season 33-22. Stanford went to the NCAA Fayetteville Regional, falling in their first game to South Dakota State, before picking up wins against Manhattan and South Dakota State. The Cardinal ultimately finished the season with a 7-3 loss to No. 6 Arkansas.
The game will be streamed live on BTN+ (subscription required). Fans can also listen to the live broadcast on the Huskers Radio Network or Huskers.com with the call from Nate Rohr and Mattie Fowler Burkhardt. Fans can follow the action on Twitter (@HuskerSoftball).

Wednesday's baseball game between Nebraska and South Dakota State has been canceled due to weather.

Ticket holders for this game can exchange their tickets for general admission seating to one of the remaining regular-season home baseball games. Click here for more information on how to exchange tickets for another event.

Nebraska opens Big Ten play this weekend, hosting Michigan on Friday-Sunday, March 25-27. First pitch on Friday is set for 7:32 p.m., followed by a 2:02 p.m. start on Saturday and first pitch on Sunday at 11:02 a.m. Friday and Sunday's games will be broadcast on Big Ten Network, while Saturday's game can be seen on Nebraska Public Media.

The NCAA announced on Tuesday, March 22, that two Husker gymnasts have qualified for the NCAA Tournament. Nebraska's representatives will travel to Seattle, Wash. to take part in Round 2 on Thursday, March 31. Kinsey Davis and Clara Colombo will represent NU during the tournament.

Junior Clara Colombo will take part in the NCAA Tournament on one apparatus, uneven bars. Colombo has a national qualifying score of 9.870 while she has received a 9.900 on the event three times this season. The Caravaggio, Italy, native, claimed the uneven bars title at the Big Five meet.

Nebraska's two representatives will compete in Round 2 of the NCAA Tournament on Thursday, March 31, in Seattle, Wash. The event will take place at 3 p.m. and 9 p.m. CT and will be streamed on ESPN+.