Huskers Step Back into Big Ten Action at Ohio State 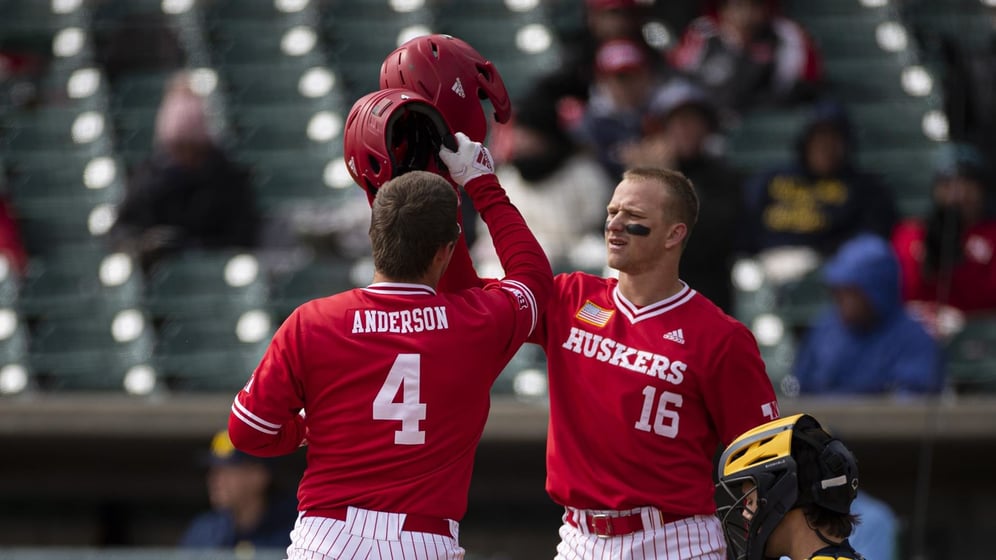 Nebraska returns to Big Ten action this weekend, as the Huskers travel to Ohio State for a three-game series on Friday-Sunday, April 1-3 at Bill Davis Stadium in Columbus, Ohio.

All three games this weekend will be broadcast live on B1G+, with Tyler Danburg and Caleb Spinner on the call. Fans can also listen to Greg Sharpe and Ben McLaughlin call all of the action this weekend on the Huskers Radio Network. All three games will be carried on KLIN (1400 AM) in Lincoln and KXSP (590 AM) in Omaha. Every game this season can be heard for free on Huskers.com and the Official Nebraska Huskers App for both iOS and Android devices.

Last Time Out
Nebraska fell 3-2 in a midweek matchup at Creighton on Tuesday night at Charles Schwab Field in Omaha. Garrett Anglim began the second with a double to right center and later scored on Core Jackson's RBI single up the middle to open the scoring. The Bluejays responded with two runs on three hits in the bottom of the second to take a 2-1 lead. Creighton capitalized on a two-out fielding error by the Huskers in the fifth to extend its lead to 3-1. Nebraska tacked on a run in the seventh and had runners on first and third with no outs in the eighth but couldn't get another run home to tie the game.

The Series
• The Huskers and Buckeyes have met 29 times on the diamond, with Nebraska holding a 16-13 record in the all-time series.
• The two teams played each other four times last season, twice in Minneapolis and two times in Bloomington, Ind.
• Nebraska and Ohio State split two games in U.S. Bank Stadium in March, while the Huskers swept the Buckeyes with victories of 11-9 and 9-0 in May.

Quick Hits
• Garrett Anglim is hitting a team-best .358 at the plate, followed by Griffin Everitt (.298) and Luke Jessen (.271).
• Everitt leads the Huskers with five home runs and 17 RBI, while Max Anderson has scored a team-high 17 runs this season.
• Brice Matthews has a team-high nine stolen bases on the season and is second on the team with six doubles, two home runs and 12 RBI.
• Emmett Olson and Tyler Martin have made a team-high 10 appearances on the mound this season, followed by Mason Ornelas and CJ Hood with eight appearances.
• As a team, Nebraska is hitting .242 with 182 hits, 36 doubles, seven triples, 13 homers and 118 runs.
• The Husker pitching staff has a team ERA of 5.05, while allowing 140 runs, 110 earned, and striking out 197 in 196 innings.

Brice on Base
• Brice Matthews enters this weekend's series with a 17-game on-base streak dating back to the final game of the TCU series on Feb. 27.
• In the 17-game stretch, Matthews is hitting .297 with five doubles, two home runs, eight RBI and 14 runs.
• Matthews has tallied five multi-hit games during the streak, including a three-hit performance in the home opener vs. Omaha.

Freshmen Making an Impact
• 11 freshmen have made their collegiate debut this season for the Huskers.
• The six freshmen pitchers have combined for 31 appearances on the mound, including two starts, while the five other freshmen have totaled 78 games played, including 60 starts.
• The freshmen are responsible for 30.1 of the 196 innings pitched by the Husker pitching staff this season and 34 of the 197 strikeouts this season.
• At the plate, the freshmen have recorded 54 hits, 32 RBI and 27 runs through the first 23 games, which is 28.3 percent of Nebraska's offensive production in runs, hits and RBI this season.

Ninth-Inning Thrillers
• Nebraska has had six games this season decided in the ninth inning, going 3-3 in those six games.
• The Huskers suffered walk-off losses at UT Arlington and Omaha before posting three walk-off wins in a four-game stretch against Omaha, New Mexico State and Texas A&M-Corpus Christi.
• The largest deficit Nebraska has overcome in the ninth is three after scoring four in the bottom of the ninth in the 13-12 win over Texas A&M-CC.
• The Big Red suffered its third loss in the ninth inning this season in last weekend's series vs. Michigan. The Huskers climbed back to tie the game at six in the bottom of the eighth before allowing two runs in the top of the ninth in an 8-6 loss vs. the Wolverines.

The Nebraska softball team is set to host Rutgers in a three-game series in Lincoln, Neb. this April 1-3 at Bowlin Stadium. Fans can listen to the games on the Huskers Radio Network or Huskers.com with the call by Nate Rohr and Mattie Fowler Burkhardt. All games will also be streamed live on BTN+ (subscription required).
Nebraska (22-9) has won the last seven games with an offense that leads the Big Ten in numerous categories including runs, hits, home runs, RBIs, total bases, slugging percentage and on-base percentage. Billie Andrews is the conference and national leader in home runs with 17. Andrews is also the Big Ten leader in RBIs (37), total bases (96), home runs per game (0.55), RBIs per game (1.19) and slugging percentage (.932). Junior-transfer Mya Felder leads the Huskers with a .425 batting average, tallying 31 hits, five doubles, two homers and 17 RBIs.
In the circle, seniors Olivia Ferrell and Courtney Wallace have been leaders throughout the first half of the season. Ferrell (12-4) holds a 2.24 ERA with 109 strikeouts through 96.2 innings. Wallace (10-4) has a 3.60 ERA through 89.1 innings and has tossed 64 strikeouts.
Rutgers (23-12) opened Big Ten Conference play against Minnesota, dropping the series, 2-1. The Scarlet Knights claimed a midweek victory in an in-state matchup against Monmouth, winning 11-3. This will be Rutgers first time traveling to Lincoln to take on the Huskers.

Huskers in the Ranks

Junior Clara Colombo competed in the afternoon session, earning a 9.900, matching her career-high, on uneven bars.

Ryan Martins was the top collegiate athlete in the 10,000 meters at the Mike Fanelli Track Classic on Thursday in San Francisco, Calif.

Martins ran a time of 29:44.24 to finish third overall in the 55-man field behind two professional distance runners. Martins' time is a personal best and ranks sixth in school history.

Mark Freyhof also posted a personal-best 10,000 meters time of 30:09.72, which ranks ninth in NU history. He finished ninth overall in the race and fifth among collegiate athletes.

Bailey Timmons will run the 5,000 meters for the Huskers on Friday at the Mike Fanelli Track Classic. Other members of the Husker track and field team will begin competition at the Pepsi Florida Relays.

The Nebraska men's tennis team opened conference play with a 1-1 record on the weekend, falling to No. 5 Michigan on Friday, 4-0, and then knocking off Michigan State on Sunday, 4-3. The Huskers return home for their first conference matchup of the season against Wisconsin, seeking their second conference win of the campaign.

Live streams and stats are available in the links provided above. Updates will be posted to Huskers.com and @HuskerMTennis on Twitter.

Scouting Wisconsin
• The Badgers enter Saturday's matchup with an 7-8 record, having defeated No. 42 Oregon and Michigan State earlier in the year.
• Tim Dzhurinskiy leads Wisconsin with 10 wins during the spring while Jared Pratt has competed in the No. 1 spot for the Badgers in every match but one, holding a 3-11 record.
• Wisconsin recently announced the signing of Michael Minasyan for the 2022-23 season, who won the Swedish U-18 national championships in both singles and doubles play and holds a Universal Tennis Ranking (UTR) of 12.35.

Series History
• The Badgers hold an 11-5 advantage over the Huskers, winning the last six matches of the series. Nebraska won the four out of the first seven matches between the two teams.
• Nebraska is 1-4 at home against Wisconsin with the lone win coming March 3, 2014, where they won 7-0.

Up Next
• The Huskers stay home for a pair of conference matchups as they host No. 55 Illinois on April 8 at 5 p.m. CT. and No. 25 Northwestern on April 10 at Noon CT at the Dillon Tennis Center in Lincoln, Neb.

Hietaranta Continues Strong 2022 Campaign
• Roni Hietaranta started the year off strong, winning his first six singles matches to begin the season with a 6-0 record. Dating back to the fall, he now has 18 total singles wins which marks the most on the team thus far.
• On Jan. 25, Hietaranta was named Big Ten Co-Athlete of the Week after singles wins over Baylor and Oklahoma. He knocked off the No. 54 ranked singles competitor in the nation, defeating Oklahoma's Jordan Hasson, 6-4, 7-5. The Lappeenranta, Finland native also defeated Baylor's Cole Gromley in the No. 6 spot, 6-1, 6-3.
• Three weeks ago, Hietaranta rallied back from a 4-2 hole to knock off Wichita State's Orel Ovil and clinch the victory for the Huskers. He won the singles match against Ovil 6-4, 2-6, 6-4. Last weekend, he knocked off Princeton's Filippos Astreinidis in consecutive sets to push his spring record to 7-3.
• Following a short injury stint, he returned against UCF and won in the No. 6 spot, 6-3, 6-3, to give him eight wins in the spring.
• Hietaranta followed that up with a pair of wins against Oregon and Michigan State to reach 10 spring wins, the first Husker to accomplish such feat.

Maruyama Shines In Singles and Doubles Play
• Shunya Maruyama ranks second on the Huskers with 14 wins, as he holds a 7-6 spring record. Five of his wins have come in the No. 3 and No. 6 spots.
• He has been victorious in six of his last eight completed matches, including singles victories in matches against UCF, SMU, and Michigan State.
• After leading the Huskers in wins last season, he has carried over momentum to this campaign and has been a consistent force for Nebraska.
• Dario Huber and Maruyama have won their last four doubles matches, and have not dropped a doubles match since March 12 against Cornell.

Tough Schedule
• Nebraska has matched up against seven, top 75 teams in its first 14 games to begin the spring season. They lost to No. 2 Baylor at home, 6-1, and No. 24 Oklahoma on the road, 5-2 earlier in the year.
• In the Blue-Gray National Classic, they dropped matches to both No. 29 Princeton and No. 25 Auburn. Nebraska recently lost to No. 19 Pepperdine before taking part in the Pacific Coast Doubles Championships this past weekend.
• The Huskers got their first ranked win of the season as they knocked off No. 48 UCF on the road, 4-3. They then dropped their opening conference match against a talented No. 5 Michigan team, 4-0.
• As they enter conference play, the Huskers will meet currently ranked opponents in four of their last seven games.