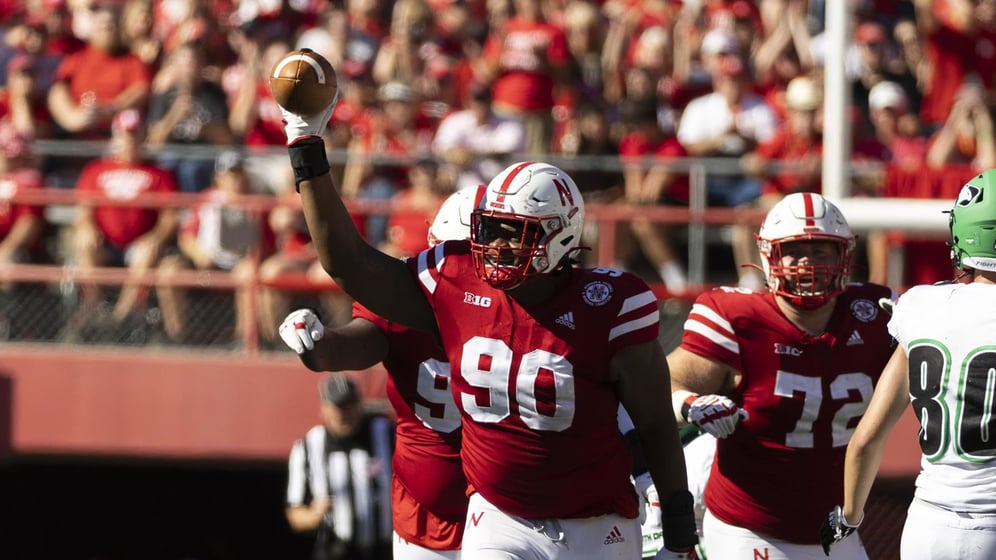 The Matchup
Nebraska continues a four-game homestand on Saturday evening at Memorial Stadium against the Georgia Southern Eagles. The matchup is set for a 6:30 p.m. kickoff, with television coverage provided by FS1. The game is also available on the Fox Sports App and can be heard on the Huskers Radio Network and Huskers.com.

Nebraska enters the contest at 1-1, following a 38-17 victory over North Dakota last Saturday at Memorial Stadium. The game was tied at 17 late in the third quarter before Nebraska scored the game's final 21 points to pull away for the victory. The Huskers leaned on the running game in the second half, churning out 181 yards on the ground after intermission. The Blackshirt defense also rose to the occasion in the second half, allowing only 133 yards after halftime.

Saturday's game will feature several special events, including Ag Day at Memorial Stadium, with Nebraska planning several presentations honoring the state's agricultural background. Nebraska will also wear throwback uniforms recognizing the 1983 "Scoring Explosion" season, and the 2022 class of the Nebraska Football Hall of Fame will be honored before the game.

Series History: Nebraska vs. Georgia Southern, Sun Belt
Saturday's game is the first-ever meeting between Nebraska and Georgia Southern. It will mark the Huskers' first game against a Sun Belt Conference opponent since opening the 2019 season against South Alabama.

• Nebraska is 15-2 all-time against current members of the Sun Belt Conference, with 16 of the 17 games taking place in Memorial Stadium.

Huskers Enjoying Four-Game Homestand
Nebraska opened its seven-game home schedule last Saturday with a 38-17 victory over North Dakota. The game was the first of four straight home games at Memorial Stadium, including three non-conference games and the Big Ten home opener against Indiana on Oct. 1.

Huskers to Wear Alternate Uniforms, Two 55 Gear
Nebraska will wear alternate uniforms for Saturday's matchup with Georgia Southern. The alternate uniform is a tribute to Nebraska's 1983 Scoring Explosion team and features a design similar to that era of Husker football. The 1983 team was undefeated in the regular season and finished No. 2 in the national polls with a 12-1 record. The Huskers led the nation in rushing and scoring offense, averaging 401.7 rushing yards and 52.0 points per game, respectively. Nebraska coaches will also wear special polos and hats from the TWO55 collection on Saturday, as Nebraska Athletics launches year two for the program.

• The TWO55 Collection, which derives its name from Hall of Fame Coach Thomas William Osborne and his record of 255 wins, is designed to connect style with Nebraska pride in a specially curated fashion collection. TWO55 includes merchandise from top Nebraska licensees, including adidas, Cutter & Buck, Peter Millar, Antigua and Game Day Couture, among others.

• The TWO55 Collection honors Coach Osborne's legacy off the field with 50 percent of the royalties generated from every TWO55 item sold benefitting the mission of Tom and Nancy Osborne's TeamMates Mentoring Program.

Nebraska Offense Starting Fast
In the season's first two games, the Nebraska offense has been at its best to open both the first and second half. The Huskers have produced four touchdowns on four drives to open halves in games against Northwestern and North Dakota.

• Dating back to last season, Nebraska has scored a touchdown on its opening drive of the game in four consecutive games. The game-opening scoring drives have been directed by three different quarterbacks.

This Week's Numbers
8 - Eight of Nebraska's nine touchdowns this season have been scored by players who had not previously scored a touchdown in a Husker uniform. Anthony Grant (4), Casey Thompson (1), Nate Boerkircher (1), Ajay Allen (1) and Isaiah Garcia-Castaneda (1) have all scored their first TDs at Nebraska in the first two games.

100 - Nebraska running back Anthony Grant has topped the century mark on the ground in each of the first two games. He is the first NU running back with consecutive 100-yard games since 2018.

6 - Six former Husker greats will be inducted into the Nebraska Football Hall of Fame this weekend. All-Americans Prince Amukamara and Toniu Fonoti headline the class that will be officially inducted on Friday and honored on the field before Saturday's game.

Head Coach Scott Frost and Nebraska football players met with members of the media Monday afternoon to preview Saturday's home game with Georgia Southern at Memorial Stadium. Kickoff between the Huskers and the Eagles in Lincoln is set for 6:30 p.m. (CT) with live television coverage from FS1. The game can also be heard across the Huskers Radio Network.

Nebraska will be facing Georgia Southern for the first time in the history of the schools. The Eagles are 1-0 after opening the Clay Helton-era with a 59-7 home victory over Morgan State on Saturday. Nebraska is 15-2 all-time against members of the Sun Belt Conference.

Transcripts from Coach Frost and select players can be found below: