Sioux County drops pair of games on the road 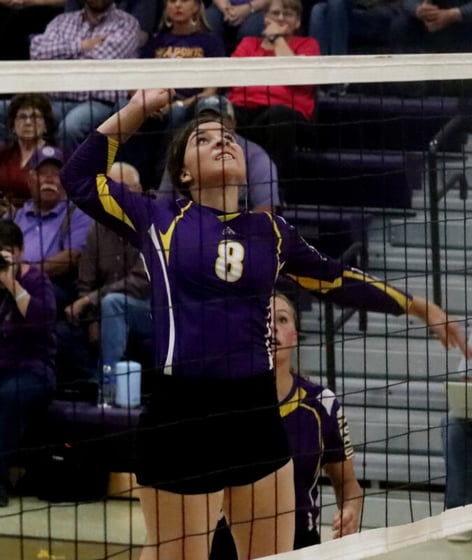 The Sioux County Warriors suffered losses on the football field and volleyball court this weekend.

The Lady Warriors dropped a four-set match to Bayard Saturday, while the boys lost on the road to Wauneta-Palisade.

Bayard took the contest from Sioux County 25-15, 25-16, 25-27, 25-15. The Warriors managed just 12 kills, 3 blocks and three ace serves in the opening two sets, while allowing the Tigers 16 kills and nine ace serves. Bayard controlled the first set from the beginning and opened up a 14-4 lead before the Warriors clawed their way back to within six points. Sioux County led early in the second, going up 4-2 but eventually trailing 17-7 to give Bayard the two-to-nothing advantage.

In a must-win third set for Sioux County, the Warriors stormed back from a 3-0 deficit with two kills and a block by Tamika Eastman to tie the game at six. Three consecutive blocks moments later by Tamika Eastman and her sister Sierra, along with several errors by the Tigers, let Sioux County move ahead 12-6. A strong offensive attack allowed the Warriors to extend their lead to eight, but Bayard didn’t back down and tied the contest at 20 behind two kills and three ace serves. The Tigers got the go-ahead point when they blocked Sierra Eastman’s attack and looked to take the sweep with the score at 24-21. Sioux County, however, capitalized on errors by the Tigers and landed two final kills and an ace serve to keep the contest alive.

The Warriors were much improved in the third set with 13 kills, four blocks and two aces. Bayard outpaced the Warriors’ attacking game with 14 kills and landed four ace serves in the set but only blocked three Sioux County hits.

Bayard walked away with the fourth set and the match after an early tie at four. The Warriors soon trailed by four and never threatened the Tigers again. Bayard won the attacking game 10 kills to four, and the Warriors were unable to block anything the Tigers tried. Overall, Bayard had 40 kills in the match, five blocks and 14 ace serves. Sioux County posted 29 kills, seven blocks and five aces. The Warriors were led by Tamika Eastman with 12 kills and five blocks. Kaylee Juhnke contributed another eight kills.

The Warriors’ six-man football team traveled to Wauneta-Palisade Friday. Down 14-6 at halftime, Sioux County failed to mount a comeback and lost 33-12, dropping to 2-1 on the year.