Behind her fourth career goal, Abbey Schwarz and the Nebraska soccer team (2-3-3) earned their second tie in a row with a 1-1 finish on Sunday afternoon at Hibner Stadium.
Monday, September 12th 2022, 5:05 AM MDT
By NU Athletic Communications 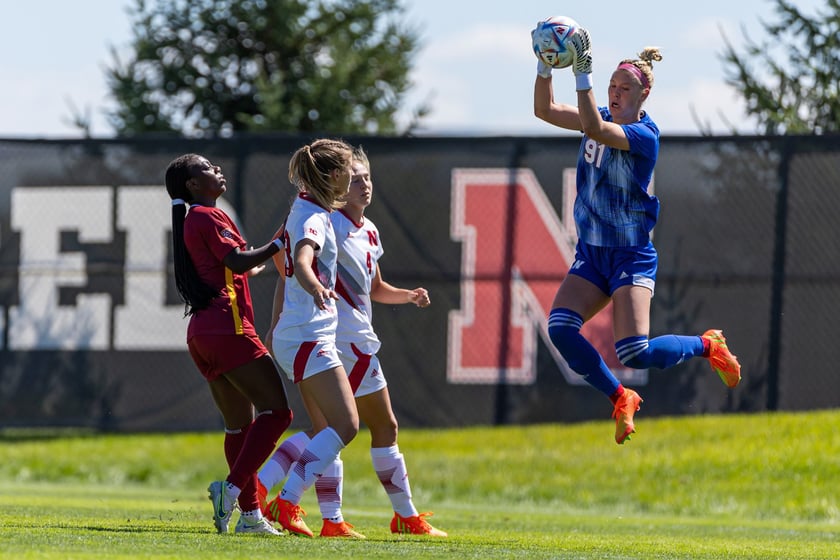 Lincoln, Neb. – Behind her fourth career goal, Abbey Schwarz and the Nebraska soccer team (2-3-3) earned their second tie in a row with a 1-1 finish on Sunday afternoon at Hibner Stadium.

The Huskers struck first in the 37th minute as Schwarz scored her first goal of the season off assists from Sarah Weber and Eleanor Dale. Lauryn Anglim started the play for the Huskers as she shot the ball into the penalty box. Dale headed the shot to Weber who gathered and found Schwarz for the goal into the back left corner of the net.

In the second half, the Trojans scored the equalizer in the 54th minute as Simone Jackson found the back of the net off an assist from Croix Bethune. The teams continued to battle, but the remainder of the game was scoreless.

Junior goalkeeper Sami Hauk, who secured eight saves on the day, was one of four Huskers to play the full 90 minutes as she was joined by Nicola Hauk, Anglim and Weber.

Overall, the Trojans topped the Huskers in shots (17-16) and shots on goal (9-3), but NU had a balanced offensive attack. Their shots were distributed amongst seven players with Dale leading the team with six.

The Huskers return to action next week when they open conference play against Minnesota at home (Friday at 7:05 p.m. CT).

First Round Canceled in Wisconsin

The first round of the season for the Nebraska men's golf team at the Badger Invitational was canceled because of heavy rains at University Ridge Golf Course in Madison, Wisconsin on Sunday.