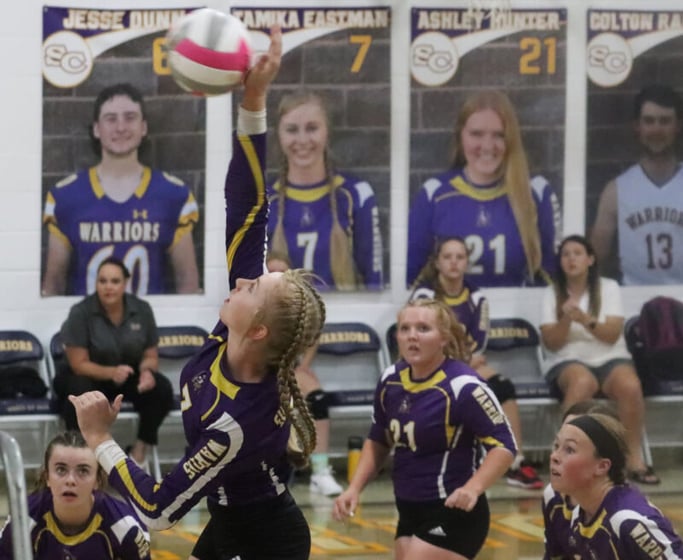 A five-set slugfest ended with Potter-Dix’s undefeated volleyball record intact as they bested the Sioux County Warriors 3-2 in a marathon match.

The Coyotes took the first set 25-18 as they outhit the Warriors nine kills to six. Potter-Dix looked to repeat in game two, up by seven points early in the set. They got stuck at game point, however, as Kaylee Juhnke and Britney Klein combined for three consecutive kills to make it 23-24. A Potter-Dix error tied the contest at 24, and Coyotes went ahead again on a kill, only to see the Warriors answer on a Tamika Eastman kill. A series of errors by both teams put Potter-Dix ahead 27-26. Juhnke tipped the ball over for a kill and the tie, and a Coyote error and a Sierra Eastman kill handed the game to the Warriors 29-27.

Potter-Dix took the next set 25-17 but not until after the teams traded the lead six times and tied the score seven times through set point 13. The Coyotes moved ahead 15-13 on two ace serves and controlled the rest of the game. Potter-Dix dropped the must-win fourth set 25-12. Sioux County out-served and outhit the Coyotes, landing eight aces and five kills in the game to force the fifth set.

The race to 15 was another tight one early, with three lead changes and three ties. Potter-Dix took control with a 4-3 lead and held the advantage until Sioux County clawed back to tie it at 10 behind a block and two kills by Tamika Eastman and an ace serve by Sierra Eastman. Another kill by Tamika Eastman kept the Warriors within one, but Potter-Dix answered and closed out the match with a 15-12 win.

Sioux County’s loss to the Coyotes was the Warriors second in two days, as they dropped a match to Lusk 3-1 Thursday. Lusk took the first set 25-14, while the Warriors dominated 25-13 in the second. Momentum shifted back to Lusk in the final two games, 25-12, 25-14.