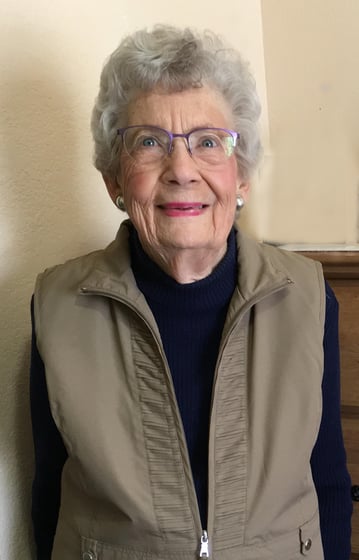 Friends may stop at the Gehrig-Stitt Chapel on Thursday from 1-6:00 P.M.  and leave condolences for the family.

You may view Evelyn’s Book of Memories, leave condolences, photos and stories at www.gehrigstittchapel.com.

On December 20, 1948 Evelyn was united in marriage to Earl Geu at the United Methodist Church in Whitney, Nebraska.  They farmed and ranched north of Colton for 66 years until Earl‘s death in 2015.

Evelyn was a wonderful homemaker, mother and seamstress who made beautiful clothing for herself and her daughters. She delighted in making delicious meals for her family, hired men and custom harvesters.  Her specialties included: angel food cake, rhubarb pie, and cinnamon rolls. She pursued her passion for music by singing at many weddings and funerals, directing Saint Paul’s Lutheran Choir, and teaching piano to her children.

In 1969, Evelyn returned to the classroom, teaching elementary grades at District 97 and Lorenzo Public School until her retirement 20 years later.  She especially enjoyed teaching Nebraska history, music, and directing the annual Christmas programs.  While teaching, she completed her Bachelor’s Degree from Chadron State College.

One of “Oma’s” greatest joys was spending time with her cherished grands and greats.  She provided them with unconditional love and a lifetime of wonderful memories.

She was preceded in death by her husband Earl; her parents Percy and Ellen Cartwright; brothers Michael and John Cartwright; and brothers-in-laws and sisters-in-laws Henry and Ann Geu, Arlene and Rodney Mathewson and Harold Geu.

Evelyn resided in Sidney following the death of Earl, spending those years at Sloan Estates and later Sidney Regional Medical Center Extended Care.  We thank you all for creating a sense of community for her and making her feel welcome.  She deeply appreciated the care and compassion you provided.