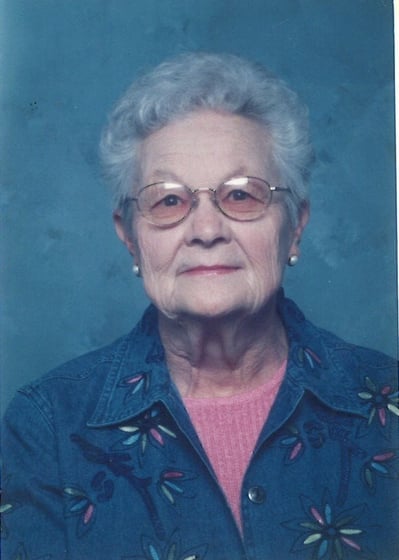 Funeral services will be held on Thursday, September 22, 2022 at 11:00 A.M. at St. Paul’s Lutheran Church northeast of Potter, NE with Pastor Ted Bourret officiating.  Burial will follow in the St. Paul’s Cemetery. Services will be recorded and available on our website for viewing.

Friends may stop by Gehrig-Stitt Chapel in Sidney on Wednesday from 1–6 P.M. with family present between 4-6 P.M.  In lieu of flowers, please make a contribution to St. Paul’s Lutheran–Potter, Orphan Grain Train, or The Lutheran Hour in Adella’s memory.

Gehrig-Stitt Chapel & Cremation Service, LLC is in charge of Adella’s care and funeral arrangements.  You may view Adella’s Book of Memories, leave condolences, photos and stories at www.gehrigstittchapel.com.

Adella Caroline Barbara (Horst) Oberndorfer was born on May 8, 1929 on the family farm west of Gurley, NE to Otto F. and Edna K. (Weissman) Horst.  She was baptized and confirmed at Gurley’s Salem Lutheran Church.  She attended District 61 Center School and graduated from Gurley High School in 1947.  She worked in Sidney at Montgomery Wards, Maddox Motors, and the Sioux Ordinance Depot until her marriage to Normund W. Oberndorfer on April 19, 1953 at Salem Lutheran, Gurley.  They farmed northwest of Potter where she resided the rest of her life until moving to Sloan Estates in Sidney in 2018.

After the death of her husband on Sept. 15, 1966 she lovingly raised her three daughters and managed the family farm.  She was a member of St. Paul’s Lutheran Church-Potter and the Lutheran Women’s Missionary League where she held various offices and quilted for mission projects.  She always enjoyed spending time with her grandchildren, sports, yard work, and life on the farm.

She was preceded in death by her parents; parents-in-law Arthur & Martha Oberndorfer; infant son Mark in 1961; her husband; her daughter and son-in-law Charlene & Rod Lashley in 2004; and daughter Peggy Oberndorfer in 2011; along with her step-mother Hazel Horst; step-brother Leroy Johnson and brother Virgil Horst.