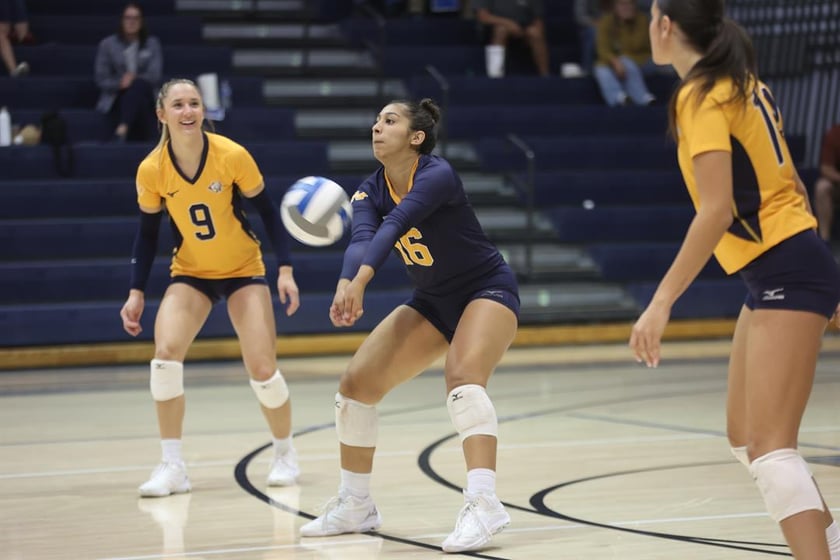 The Cougars saw everyone suited up contribute in some fashion on the night in the win. Maya Angelova, said it was nice to see everyone contribute across the board in the win.

“I think we played pretty good today,” Angelova said. “Everyone got to go in and that’s always nice to see. We can always do better but I’m proud of us.”

WNCC had a really balanced attack in the win on Friday. Jenna Curtis, Erica Fava, and Emmalei Mapu all finished with eight kills followed by four kills from Alex Hernandez and Angelova. Charli Blackman had three kills while Ale Meoni had two.

Serving was also a big part of the win for the Cougars. WNCC had six ace serves with Fava finishing with three aces and eight points. Also collecting eight points with an ace was Anakaren Chavez. Four different players had two points with Shanelle Martinez, Curtis, Jayla Brehmer, and Juliana Oliveira.

There weren’t a lot of defensive digs as Curtis led with seven followed by Fava, Chavez, and Shae Hardy tallying six digs.

Martinez finished with 22 set assists while Hardy had 12.

WNCC started the first set leading 9-4 before Hernandez went on a 5-point service run to lead 16-5. WNCC went up 22-7 after four points from Fava and won the first set 25-11 on a missed serve.

The second set was a little closer. WNCC led 6-3 after two Hernandez points, but Lamar sliced the Cougar lead to one at 7-6. WNCC went up 15-10 on an Oliveira kill and then went up 18-11 on two Oliveira service points. Chavez finished off the set with four points including two kills from Blackman and the 25-13 win.

Hernandez got the Cougars started early in the third set leading 5-1 and after two Brehmer points, including an ace, WNCC led 8-2. The Cougars went up 11-4 on an Angelova kill and then 17-5 after Hardy had five points.

WNCC, 20-3, will now face Laramie County Community College at home on Tuesday beginning at 6 p.m. Angelova said they just need to play as a team and come Tuesday to capture their 21st victory.

“For our game on Tuesday with LCCC, we have to keep our motivation to win,” she said. “I think we can pull it off if; we just have to be a team and believe in each other.”

The Western Nebraska Community College and Casper College women’s soccer match was an evenly matched contest with both teams battling to the end.

The end, however, wasn’t what the Cougar women wanted as neither team scored in regulation and it was with 6:24 left in the first overtime that Casper’s Alyssa Seaich took a pass from Cesia Swain and found the goal for the game winner.

It was a game where both teams had plenty of chances in both halves. Both teams were nearly equal on shots in the game with Casper registering 15 and WNCC 14.

The first half saw WNCC get three shots early before Casper had two big shots, one was saved by Cougar goalkeeper Summer Parnell and the second went wide.

WNCC then had a prime scoring opportunity when Andrea Jimenez lined up for a penalty kick with 21:49 to play in the first, but the shot wasn’t good. Casper would finish the half with three shots that also missed as the two squads were tied at 0-0.

The second half saw both teams have chances at different times but neither team could get a score. With seven minutes to play, Tania Razo had a perfect shot on target going into the wind, but the wind caught the ball and brought it back into play.

WNCC later had a free kick that was blocked and then the rebound went high. With 2:53 remaining, WNCC had another prime shot with another penalty kick after Aileen Perez was fouled inside the box. Lesley Vasquez lined up for the PK and the shot was saved by the Casper goalkeeper forcing overtime.

In the first overtime period, WNCC had two chances to score but couldn’t find the back of the net and that set up Casper’s game-winning drive.

WNCC finished with five corner kicks in the match while Casper had three.

WNCC will look to get back on the winning track when they host Northwest College on Saturday at 1 p.m. at Landers Soccer Complex. The Northwest contest is the final regular season home match for the Cougar women.

The Western Nebraska Community College men’s soccer team played a strong match against the 12th-ranked team in the nation and it was a strong defensive contest with the Thunderbirds capturing the 1-0 win on Friday at Landers Soccer Complex.

It was a contest in which WNCC played a strong defensive contest against Casper as neither team scored in the opening half. WNCC only had three shots in the first half while Casper had at least seven good scoring chances, but neither team scored as they entered intermission knotted at 0-0.

The second half saw WNCC get a shot off early, which wasn’t good. Casper then had a shot with 23 minutes left in the game and finally found the back of the net with 22:12 to play as Casper’s Kota Yamanashi scored after one shot was saved and Yamanashi scored on the rebound.

WNCC then had to pick up the pace to try to get the tying score and with 15 minutes to play, Rodrigo Cercal had a free kick that sailed high. WNCC had another shot with 8:40 to play that was saved by Casper’s goalkeeper.

WNCC kept trying to get the tying score with another shot at 6:25 that went high and then back-to-back corner kicks with 2:15 to play and then a minute to play. The second corner kick just missed going in.

WNCC kept fighting and after a foul with one second to play, Jacob Collins had a free kick from midfield and his shot was on target for the net, but it went right to the goalkeeper to end the match.

WNCC had just seven shots compared to 17 for Casper. Casper also had six corner kicks to four for the Cougars.

WNCC, who suffered their first conference loss on Friday, will look to rebound on Saturday when they host Northwest College at 3:30 p.m. It will be the Cougars' last regular season home contest of the year.