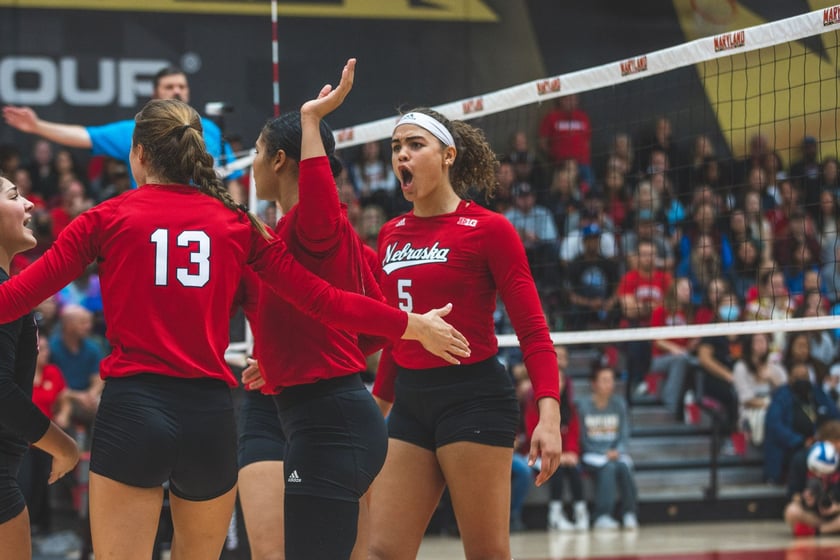 The match was a defensive battle as Nebraska hit .099 but held Maryland to .046. Maryland, the No. 1 blocking team in the country, outblocked the Huskers 17-13. But the Huskers won the serve game with seven aces and five errors compared to four aces and six errors by the Terrapins.

Whitney Lauenstein had 11 kills, seven digs, six blocks and four aces. Bekka Allick was the most efficient Husker on the day with nine kills on .571 hitting with four blocks. Madi Kubik added nine kills and 11 digs. Lindsay Krause and Kaitlyn Hord each had six kills. Hord finished with nine blocks.

Anni Evans had 19 assists, while Kennedi Orr had 18. Lexi Rodriguez had a match-high 19 digs.

Set 1: Maryland jumped out to a 7-2 lead, but the Huskers reeled off a 9-0 run to go up 11-7. Allick had a kill and a block with Orr, and Lauenstein had two ace serves during her run at the line. The Huskers continued to stretch their lead as Allick and Hord terminated kills and Orr served an ace to make it 17-10. Kubik and Hord tacked on kills for a 20-12 advantage. Maryland cut it to 20-15 with three straight points, but the Huskers regrouped after a timeout and got a kill from Lauenstein, a third ace by Lauenstein and a block by Allick and Orr for set point at 24-15, and the Huskers won 25-18.

Set 2: The Huskers started slow again, falling behind 5-2. But back-to-back slide kills by Allick and another ace by Lauenstein gave NU a 6-5 lead. Maryland went back ahead, 11-9, but the Huskers responded with kills by Hord and Lauenstein and the Terrapins committed two straight hitting errors to make it 13-11 Huskers. Lauenstein and Kubik connected with Orr for kills, and the Huskers pushed their lead to four at 17-13. Allick and Krause posted back-to-back kills, and another by Krause put NU up 22-16. After Maryland scored two in a row, Krause rolled another kill to the floor, and Hord earned set point for the Big Red at 24-18. The Terrapins came all the way back to within 24-23, but a hitting error gave NU the win, 25-23.

Set 3: Maryland took an early lead and never trailed in set three, leading by as many as five points at 18-13. Allick put down her sixth kill, and Maryland committed a hitting error before a block by Hord and Mendelson cut it to 18-16. But the Terps answered with three straight points to go up 21-16. However, Hord posted a kill and Maryland committed three straight hitting errors to let NU within 21-20. The Terps got a sideout kill, but a solo block by Hord kept the Huskers within one, 22-21. But three straight Husker errors ended the set in Maryland's favor, 25-21.

Set 4: Hord and Lauenstein started the set with a block, and two kills by Lauenstein and another block by Allick and Lauenstein helped NU go up 7-3. Maryland got back within one, 7-6, but Allick and Krause tallied kills to make it 9-7. Ally Batenhorst entered the match in the fourth set and produced a kill before a block by Hord and Krause helped the Huskers to a 12-8 lead. Batenhorst added another kill before a block by Lauenstein and Hord made the lead five, 14-9. Two more kills by Lauenstein took the Huskers to an 18-12 lead, and Krause and Allick struck for two in a row to keep NU up by six, 20-14. Batenhorst's third kill of the set made it 22-17, but the Terrapins reeled off five points in a row to draw even at 22-22. But a Maryland service error put the Huskers back on top, 23-22, and Hord and Lauenstein teamed up for back-to-back blocks to end the set and match at 25-22.

Up Next: The Huskers are on the road again next week at Michigan State on Thursday (7 p.m. CT) and at Michigan on Saturday (6 p.m. CT).

Huskers Blank Hoosiers on the Road, 2-0

Bloomington, Ind. – The Huskers scored in the opening two minutes for the second time this season en route to a 2-0 victory over Indiana on Sunday afternoon.

In the second minute, the Hoosiers had a handball in the box, which gave junior Eleanor Dale the Huskers' first penalty-kick opportunity of the season. From the spot, Dale found the back left corner of the net to give NU the 1-0 edge it would keep for the rest of the half.

Dale is now 1-for-1 on penalty kicks for her career and recorded her third goal in 2022, placing her second in the team standings behind sophomore Sarah Weber.

At the intermission, NU held the 9-3 shot advantage over Indiana (2-4-6, 0-4-1 Big Ten), with Dale and Weber registering a pair of chances apiece.

Indiana, looking for its first goal in Big Ten play, had an opportunity to tie the game in the 70th minute, but junior Sami Hauk recorded the save. Then in the 76th minute the Huskers doubled their lead as Weber tallied her team-leading sixth goal of the season. Dale shot a pass downfield to Weber who dribbled through midfield and took a sliding shot at the top of the goalbox that scored.

With the win, the Huskers move to 5-4-4 overall and 3-1-1 in the conference. In total, the teams were tied with 13 shots each and three shots on goal.

Hauk recorded her fifth career shutout and was one of five Huskers to play the full 90 minutes, along with Nicola Hauk, Dale, Lauryn Anglim and Gwen Lane.

Tulsa, Okla. - Shunya Maruyama advanced to the Round of 64 as the Nebraska men's tennis team captured five wins at the ITA All-American Tournament in Tulsa, Okla. After losing his first match, Calvin Mueller was victorious in consolation play before the Huskers headed home for Lincoln on Sunday afternoon.

Maruyama won both of his matches on Saturday, first besting LSU's Welsh Hotard in a three-set battle, 6-3, 1-6, 6-3. The Nagano, Japan native then kept the momentum going against Florida State's John Bernard with a victory in consecutive sets, 6-3, 6-3. Maruyama fell in a three-set thriller to Auburn's Will Nolan, 4-6, 6-3, 6-2, to end his tournament run after a pair of victories. Dating back to last season, he has now won four of his last six singles matches.

Roni Hietaranta prevailed in the first round over Tennessee-Chattanooga's Gabriel Castillo-Sanchez, 1-6, 6-4, 7-5. The Lappeenranta, Finland native fell in the second round against Florida State's Maxwell Benson, 7-5, 6-1. Hietaranta has been victorious in five of his last six singles matches after ending last season on a four-match winning streak.

Nic Wiedenhorn started off the tournament strong with a win against Robbie Young of Wofford, 6-2, 6-2. In the second round, Wiedenhorn was outmatched by Rice's Yasha Zemel in consecutive sets, 6-1, 6-4.

Mueller lost his lone match of the day on Saturday, falling to Pepperdine's Eric Hadigian, 7-6 (3), 6-1. He fought in the tie-breaker, but ultimately fell just short and was eliminated from the main singles draw. In consolation play on Sunday, Mueller rolled to a victory in the first round over Penn State's Malik Bhatnagar in consecutive sets, 6-4, 6-1.

Stay up to date with the action by following the Nebraska men's tennis Twitter and Instagram accounts, @huskermtennis.

The Huskers took on the Jayhawks in a doubleheader on Sunday afternoon, claiming victories in both games. Nebraska claimed game one 5-4 and then finished the day with an 11-1 victory in game two. In game one, NU took an early 4-0 lead in the bottom of the third inning. Katelyn Caneda led off with a single and advanced to second after a ground out from Ava Bredwell. Billie Andrews doubled, scoring Caneda. Courtney Wallace singled and Billie Andrews advanced to third. Sydney Gray added another single to the inning, scoring Andrews and advancing Wallace to second. Mya Felder hit a ground out, advancing the runners to second and third. Caitlynn Neal added another single, scoring Wallace and Gray. The Huskers took the 4-0 lead into the top of the fourth inning. The Big Red added another run in the bottom of the fifth. With one out, Wallace reached on an error and advanced to second after a single from Gray. With two outs, Neal singled to center field, scoring Wallace to make it 5-0. The Jayhawks rallied in the top of the fourth inning. Lyric Moore led off with a double. Sara Rozsak singled, scoring Moore. With two outs, Addison Purvis was hit by a pitch, putting runners at first and second. Shayna Espy singled up the middle, scoring Roszak. Aynslee Linduff doubled to center field, scoring two.However, the Huskers were able to hold off the Jayhawks, claiming the game one victory, 5-4. In game two, NU got off to an early lead, scoring four in the first inning. Billie Andrews reached base to lead off after an error by KU's shortstop. Gray was walked to put runners on first and second. Felder singled to right field, scoring Andrews. A sacrifice fly from Neal, scored Gray while a homer from Brooke Andrews added two more runs to put the Huskers ahead, 4-0. In the bottom of the second inning, the Huskers added another run. With two outs, Billie Andrews was walked. A single from Wallace advanced Andrews to third. Andrews went on to steal home, extending NU's lead to 5-0. The Huskers added two more runs in the bottom of the fourth inning. With one out, Kaylin Kinney doubled to left field and then advanced to third on a passed ball. Caneda was walked. Kinney scored and Caneda advanced to third on a wild pitch. Billie Andrews hit a sacrifice fly to score Caneda, making it 7-0 heading into the top of the fifth inning. Caitlynn Neal smashed a two-run homer in the bottom of the fifth to extend the lead. Brooke Andrews followed with a solo homer over the right center field to make it 10-0. NU added another run in the bottom of the sixth. With two outs, Alina Felix walked. Felder doubled to left center, scoring Felix, extending the lead to 11-0. The Jayhawks added one in the top of the seventh. With one out, Sophia Buzard singled, stealing second and advancing to third on a passed ball. Olivia Bruno doubled to left field, scoring Buzard, but it was not enough, and Nebraska claimed game two, 11-1. Nebraska returns to action next weekend for the Big Red Fall Classic. NU will face Colorado State in a doubleheader on Saturday, Oct. 8 starting at 12:30. On Sunday, the Huskers will face UNO at 10 a.m. and CSU at 3:30 p.m. Admission is free to the public.