Eagles notes: Tilt with Adams could be hotly contested 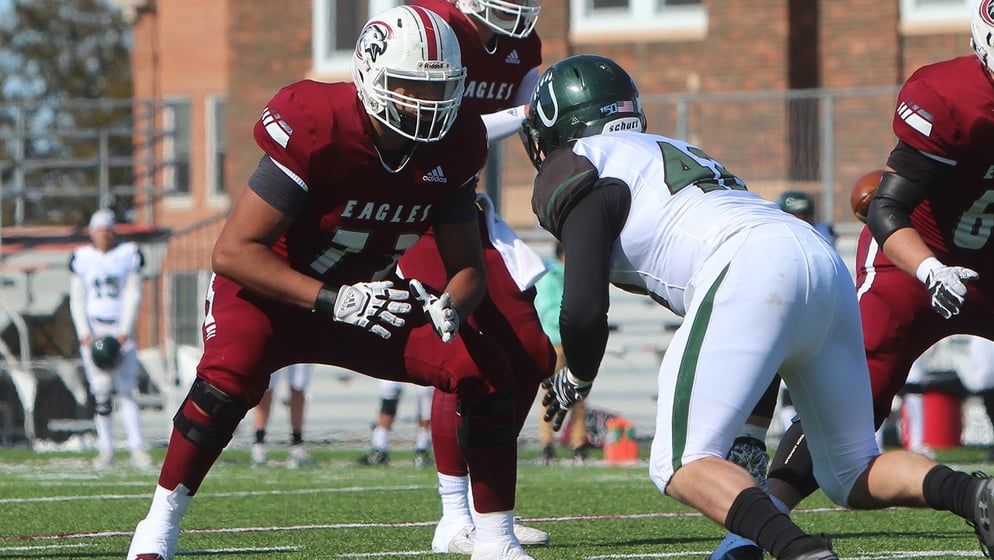 Both the Grizzlies and Eagles have defeated Fort Lewis by lopsided margins and hope to get in the winner's circle more often during the second half of the season.  That means Saturday's game could be a hotly-contested affair.
Adams State defeated Fort Lewis 52-17 on Sept. 24, while Chadron State was a 56-3 winner in Durango last Saturday.  The only other common opponent the teams have had is RMAC leader Colorado Mines. The Orediggers caged the Grizzlies 84-10, and Mines won 45-9 over the Eagles.

With quarterback Dalton Holst throwing four touchdown passes and running for a career-high 70 yards, Chadron State won last year's clash with Adams State 45-35 in Alamosa.  The Eagles ran 75 plays, 22 more than their hosts and out-yarded them 523-289.

The Grizzles were at a disadvantage when they took the field a year ago. Their top three quarterbacks were unable to play because of COVID protocol.  That meant senior tight end Brad Smith, no relation to the Eagles' long-time and highly-successful coach by the same name, was the signal caller for the first time in his collegiate career.

Smith proved to be a formidable athlete, sprinting 70 yards for a touchdown and also throwing passes of 27 and 51 yards to Bryce Hampton for touchdowns. Hampton, who played both offense and defense, also picked off one of Holst's passes and ran 25 yards with it to the end zone.

Chadron State had quarterback woes this past September, losing both junior Heath Beemiller and sophomore Mason Hamilton to injuries.  However, redshirt freshman Preston Pearson has remained unscathed as the starter in the two October games while completing 39 of 56 passes (69.3%) for 488 yards and four TDs.

The left-hander from Kearney had 70 yards added to his passing total this week after the stats were changed because the 70-yard romp for a touchdown by teammate Jamal Browder came off a short toss from Pearson instead of via a handoff as it was originally recorded.

That means the Eagles rushed for 283 yards and threw for 308 against Fort Lewis for a total of 592 yards.

Pearson is listed as the probable starter again this Saturday. Hamilton is said to be out for the season because of a separated left shoulder. Beemiller is recovering from a knee injury and has been attending practices this week but may not be ready to return for game action.

At halftime of Saturday's game, the 10 individuals who are being inducted into the CSC Athletic Hall of Fame Saturday evening will be introduced.  The inductees include John Axtell, who was the "Voice of the Eagles" for 28 of the 35 years that he has been a renowned news and sports reporter and announcer in Chadron.

Barry and Sievers still live in or near their hometowns, Eisenreich and Flammang are teachers and coaches in Casper, Haldeman resides in Vancouver, Wash., Duffield lives in Mitchell, six or so miles from Morrill, Wells is a physician in Seward, Kyba is the athletic director at Thedford and Nelson lives at Humboldt, S.D., only 10 miles from Hartford.

Eisenreich, Flammang, Duffield and Sievers are all married to women they met at CSC. Kyba is married to the brother of a basketball teammate at CSC.

The inductees have 16 kids—four boys and a dozen girls.

Coming into the match, the Eagles are sitting seventh in the RMAC standings, while Regis is second at 14-4, (10-0 RMAC).

CSC's hitting percentage this season ranks 11th in te RMAC at .155, coming off of a match where they hit .105, among the worst on the season for the Eagles offense. Freshman Bella Adams leads the Eagles hitting at a .280 clip, while sophomore Aiyana Fujiyama hits .203.

Junior Lexi Hurtado leads the team with total kills at 143. Adams and sophomore Mayson Fago have helped with 132, and 123 respectively. As a team, CSC ranks 10th in the RMAC.

Senior Breshawna Kelly, and freshman Kiley West have been aiding in the Eagles offensive attack with assist. Kelly has 298, while West has 233.

Regis ranks second in the RMAC with 882 kills, and most of that is because of Halle Theis, and Amelia Davis who rank fifth, and seventh in total kills.

Regis has the third best attacking percentage in the RMAC with a .252. Davis ranks fourth with a .333, and Nadine Burbrink ranks seventh with a .309.

The Rangers are coming off two straight matches where they hit over .300 as a team.

The Eagles are going to rely on Fujiyama at the net who has 77 total blocks on the season. Adams is second with 57. Fujiyama ranks first in the RMAC, while Adams ranks 11th in total blocks.

CSC has been strong at the net as team ranking third in total blocks with 154. Regis ranks fourth with 153.

Regis' biggest defensive player is Davis who has 69 blocks on the season. Burbrink is not far behind with 66. Davis ranks fourth, while Burbrink ranks sixth.

Junior Rylee Greiman has been leading the Eagles on the back half of the court with 189 digs on the season. Fago has 167 to help out defensively.

The Eagles rank second among all RMAC schools for digs, while Regis is sitting eighth.

Haley Kennedy will lead the Rangers on the back half of the Rangers defense as she has 293 digs, which ranks her fourth in the RMAC.

The Eagles are looking to get their first win against Regis since 2007.