Huskers Shut Down No. 14 Penn State 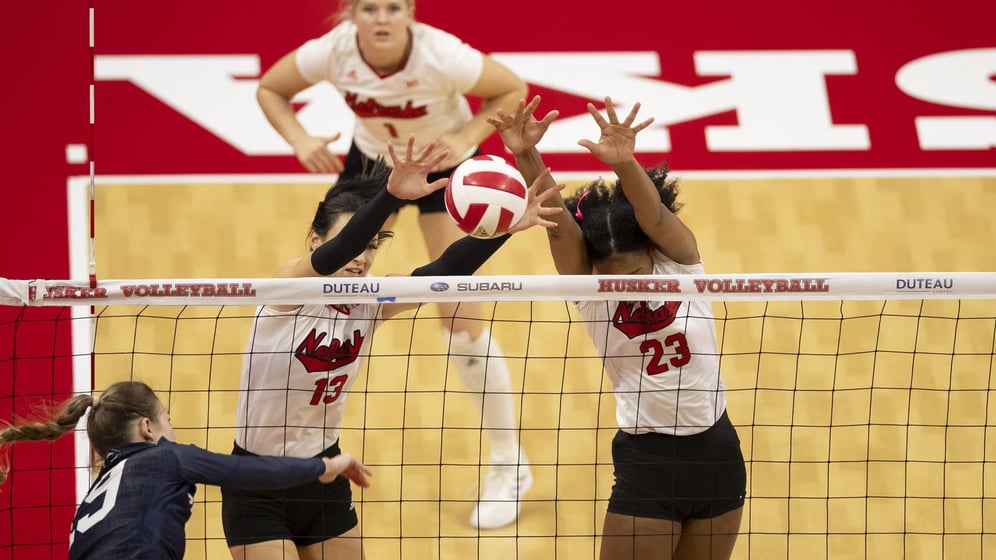 The Huskers (15-1, 7-0 Big Ten) dominated at the net as they outblocked the Nittany Lions, 16-4, to win their eighth match in a row overall and their fifth straight match against Penn State. NU's 16 blocks were their most in a match since 20 against Penn State on Nov. 2, 2018. It was also the most blocks surrendered by Penn State this season.

Kaitlyn Hord was phenomenal up front against her former team, tying her season high with nine blocks, while Whitney Lauenstein chipped in a career-best eight blocks to go with seven kills. Madi Kubik led all players with nine kills and had three blocks. Bekka Allick added six kills on .385 hitting with six blocks. Ally Batenhorst and Lindsay Krause finished with five and four kills, respectively.

Nebraska swung at a .208 clip and held Penn State to a season-low .017 hitting percentage. Lexi Rodriguez had 16 digs to lead the Huskers' back row once again.

Nicklin Hames returned to the lineup for the first time since Sept. 13 and had 20 assists eight digs. Anni Evans added six assists, and Kenzie Knuckles finished with seven digs.

NU had seven more kills (34-27) and had two service aces while yielding none to Penn State. The Nittany Lions led for just one rally the entire match.

Set 1: The Huskers went up 5-2 but Penn State rallied to tie the score at 7-7. A block by Hord and Krause put an end to a 4-1 Penn State spurt, and Hord combined with Batenhorst for another block before a kill by Batenhorst made it 10-7 Big Red. Hord and Allick posted kills, and Lauenstein combined with both middle blockers for back-to-back blocks as the Huskers went up 14-10. Penn State pulled within one at 16-15, but the Husker block came up big again as Hord and Krause stuffed a Nittany Lion attack to go back up by two. Hames then set Batenhorst on the left pin on consecutive rallies to make it 19-15. After a Penn State timeout, Hord tallied her fifth block of the set, this time with Lauenstein, to make it 20-15. Batenhorst and Kubik added kills, and Hord and Lauenstein were at it again on the block as the Big Red took a 23-16 lead. The Huskers took the win, 25-18, on the strength of a 7-1 advantage in blocks.

Set 2:  The teams battled to a 6-6 tie before NU went on a 3-0 run with kills by Krause and Batenhorst and a block by Hord and Krause. Penn State committed a pair of attacking errors and a pair of ball-handling errors to allow the Huskers to go up 13-8. After a timeout, Penn State scored a 4-0 run to get back within one, 13-12. Kubik terminated to sideout, and the senior captain added a block with Allick before a Penn State hitting error had the Huskers back up by four, 16-12. The teams sided out for 11 consecutive rallies until Penn State held serve via a Katie Clark kill that cut it to 21-19 Huskers. Another kill by Clark made it 21-20, and Nebraska used a timeout. Hord and Lauenstein posted a block out of the break, and the Nittany Lions hit long for a 23-20 Husker advantage. NU grabbed set point at 24-21 and won the set, 25-22, on a kill by Kubik.

Set 3: Kubik had three kills and Allick had two, while Allick and Lauenstein tallied another block as the Huskers bolted to a 9-2 lead. Krause terminated and Batenhorst recorded a solo block for a 13-4 Husker lead.

Up Next: The Huskers host Northwestern on Sunday at 2 p.m. at the Devaney Center in the annual Pink Match.

The Nebraska volleyball program announced a pair of time changes to its schedule on Friday.

The Huskers' road match at Illinois on Saturday, Oct. 22 will now begin at 6 p.m. (CT). The match was previously scheduled to begin at 7 p.m.

Nebraska's home match against Iowa on Friday, Nov. 11 - the 300th consecutive regular-season sellout - will begin at 6 p.m. That match was originally scheduled for a 7 p.m. start but was moved up one hour to accommodate fans planning to attend the Nebraska women's basketball game at 8 p.m. at Pinnacle Bank Arena.

Check Huskers.com for the latest times, TV and radio information.