Huskers Roll to Sweep at Illinois 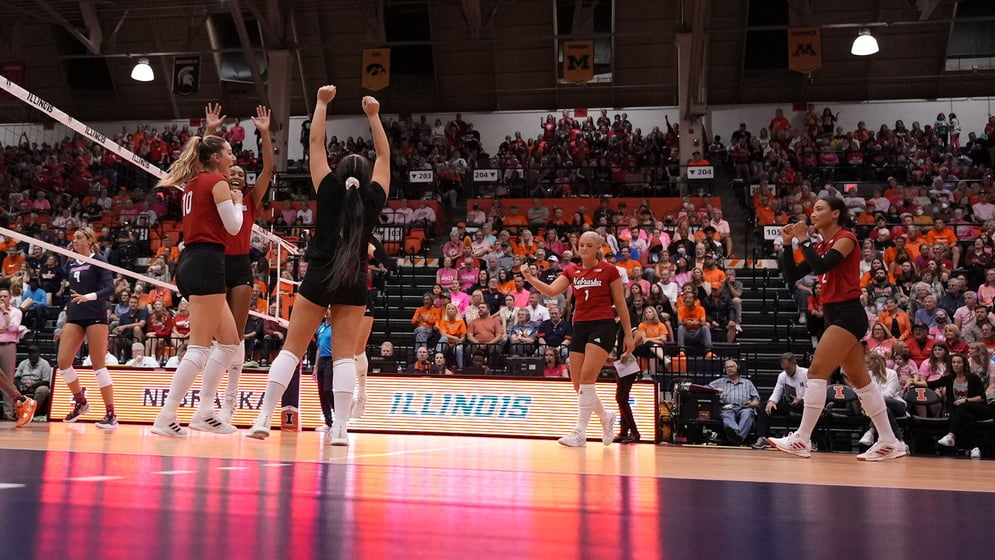 The Huskers (18-1, 10-0 Big Ten) have swept six Big Ten matches in a row for the first time since joining the conference in 2011. Overall, the Huskers have won 11 matches in a row, their longest win streak since 2018.

Nebraska was once again balanced offensively with five players posting at least five kills, led by Whitney Lauenstein's 13 kills on .346 hitting. As a team, Nebraska hit .320 and limited Illinois to .161.

Madi Kubik had 10 kills on .421 hitting, and Bekka Allick followed up her career-best performance on Wednesday at Purdue with seven kills on .462 hitting. Ally Batenhorst had five kills and hit .286, and Lindsay Krause finished with five kills.

The Huskers had a 44-30 advantage in kills and served five aces to three for Illinois, and NU committed five fewer service errors. Blocks were even at 6-6 with Kaitlyn Hord leading the way with four and Lauenstein adding three.

Set 2: The Huskers sprinted out to a 9-4 lead after four kills by Allick, two by Krause and a solo block by Krause. The Huskers went up 13-8 on a kill by Lauenstein, which happened to be Hames' 10th assist of the match and the 4,825th assist of her career, making her the new school-record holder. Lauenstein followed up with an ace serve and and Krause tallied a kill before an ace by Kubik made it 16-10 Big Red. Lauenstein tacked on three more kills, and Allick and Kubik each had one as NU won 25-16.

Set 3: Nebraska set out to finish off the sweep with kills by Lauenstein, Allick and Hames giving NU an 8-4 lead. Krause added a pair of kills around one from Allick as the Big Red increased the lead to six at 13-7. Illinois trimmed a 14-8 deficit to 14-12, but back-to-back kills by Kubik restored a 16-12 edge. The Illini fought back to get within two again at 22-20, but Kubik terminated for set point at 24-21 and posted the final kill to win 25-22.

Up Next: The Huskers begin the second half of the Big Ten slate at No. 5 Wisconsin on Wednesday. The rematch of the 2021 NCAA Championship will begin at 8 p.m. (CT).