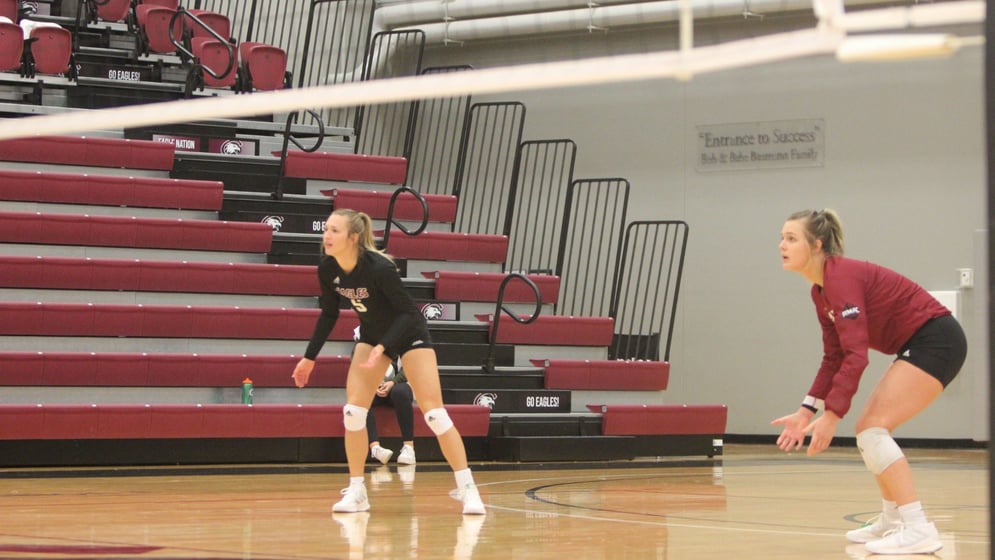 The Eagles (7-18, 5-11 RMAC) are currently sitting 11th in the Rocky Mountain Athletic Conference standings, two matches behind UCCS and South Dakota Mines for playoff contention. They will need to win both of this weekend's matches, with help from a few other RMAC contenders, in order to qualify for the conference postseason as one of the top eight teams in regular season play.

The Eagles defeated both teams earlier in the season in five sets, while on the road.

In the previous match up against South Dakota Mines, the Eagles hit .188, while totaling 50 kills. Amber Harvey led the way with 12 kills that night. Aiyana Fujiyama led the Eagles with .300 hitting.

CSC is coming off a similar performance offensively against Westminster hitting .175 in its latest match. Bella Adams leads the Eagles hitting .255 on the season. Teammate Fujiyama is also hitting over .200 with a .206 clip.

South Dakota Mines is hitting .190 as a team, but only managed .163 in the two teams' previous collision. The .190 hitting percentage ranks the Hardrockers seventh within the RMAC. The Hardrockers' Jacey Koethe hits .309 on the season, which is 10th in the RMAC, and averages 3.46 kills per set, which is fourth most.

The Hardrockers have five other players hitting over .200.

Koethe also leads the team in blocks, with the sixth-best average in the league of exactly one per set. South Dakota Mines ranks seventh in the conference, in that category, with 1.78 total blocks per set.

Black Hills has an elite defender in its backcourt as well, with Haedyn Rhoades who average the league's second best 5.17 digs per set. The Yellowjackets rank fourth as a team.

Defensively CSC recorded 13 blocks, led by Fujiyama with nine, and 80 digs, led by Schaefer with 20.

The Yellowjackets will lean on Madison Hoopman for the offensive attack as she is hitting .183 on the season along with 257 kills. Hoopman ranks ninth in the RMAC for kills.

Both Rhoades and Hoopman are daughters of CSC Athletics Hall of Famers.

The match with Black Hills State on Saturday is senior night.

There are 36 names on the 2022-23 roster. The returnees include all the Eagles who were in the lineup for the NCAA Division II Super Region 6 Wrestling Championships last February.  Most of last year's alternates also are back, and have been joined by two transfers and 14 freshmen.

"We should be better," said Hunter, who is beginning his 11th year as the head mentor of his alma mater's grapplers.  "I think we'll have good, quality depth."

How much better will the Eagles be is the question?  The team had some ups and downs last year.  It was 5-5 in dual matches, including 4-3 in RMAC tussles, but lost the last three duals to conference members by significant margins.

The Eagles also didn't fare as well at the Regional Tournament as was hoped, placing seventh among the 11 teams and qualifying just one for the National Championships.

It will be terrific if the Eagles can challenge for a top spot in the regional showdown this year because they will host the event on Feb. 25.

The fact that nearly all the 2021-22 team members are back is encouraging.  This year's roster has six seniors and nine juniors.  There also are four sophomores and four redshirt freshmen to go with the newcomers.

The seniors include Ethan Leake of Clovis, Calif., who joined the Eagles a year ago. He didn't immediately catch fire, going 5-4 during the fall portion of the schedule.  But he had an 11-6 record when he went to the Regional Tourney and avenged one of his earlier losses there while qualifying for Nationals by placing second at 141 pounds.

Two of the other seniors are at the bottom of the lineup. They are Eli Hinojosa of Imperial at 197 pounds and Mason Watt of Broomfield, Colo., at heavyweight.  They finished last season with 10-6 and 11-5 records, respectively.  Both usually make their opponents earn every point. Hopefully, they can win more of the close matches this year and qualify for nationals.

Much the same can be said for 165-pounder Preston Renner, who was Watt's teammate at Broomfield High School, and Kobe Lepe of San Fernanado, Calif., who filled the 133-pound weight class most of last year. Both had about .500 records last season, and are being challenged for the varsity slots.

Junior Rowdy Pfeil of Moorcroft, Wyo., who has been nationally ranked during his career, is going back down to 174 pounds after having a 9-10 record as a 184-pounder a year ago. He's the only team member listed at 174. To be an outstanding team, the Eagles need him to reach the potential that he demonstrated earlier.

Last year's primary 174-pounder as a true freshman, Darwin Hull of Schertz, Texas, has moved up 184. He's being challenged by redshirt freshman Keegan Gahlhausen of Pinedale, Wyo., who had a 9-7 record while competing at open tournaments.

The Eagles have numerous candidates to fill the 149 and 157 weight classes, but no solid favorites. Junior Harrison Gocke of York, Neb., who was 9-7 as a backup last winter, is the most experienced of the 157-pound contenders.

Two transfers are in the mix at 149.  Brody Lamb of Wellington, Colo., joined the Eagles at the start of the second semester last January after previously being at Northern Colorado, and Tayton Richard arrived this fall from Indian Hills Community College in Iowa.

The most successful freshman last year was Quade Smith of Layton, Utah, at 125 pounds, arguably the hardest weight class to fill.  He compiled a 10-8 record, placed fifth at the Regional Tournament and is at that weight again.

Hunter isn't counting out freshmen as he puts together the starting lineup.  They had won a total of nine state championships during their prep careers.  Hunter said they have been the most motivated freshmen he's worked with.

Three days later after Black and Cardinal Classic, the frosh will make their college debuts at the Colorado Mines Rookie Open Tournament.

Many of the Eagles will enter the Cowboy Open at the University of Wyoming on Saturday, Nov. 12, while the CSC varsity will visit the Nebraska-Kearney Lopers the next day for a dual. The Lopers are the defending NCAA Division II National Champions, and return four All-Americans from that team.

Even with the Regional Tourney in Chadron, the Eagles won't be home often this season. The only other times will be Sunday, Dec. 4, when they host a quadrangular versus San Francisco State, Western Colorado and perennial power St. Cloud State and on Jan. 19, when they dual Colorado Mesa