Joseph Talks Preparation Ahead of Minnesota 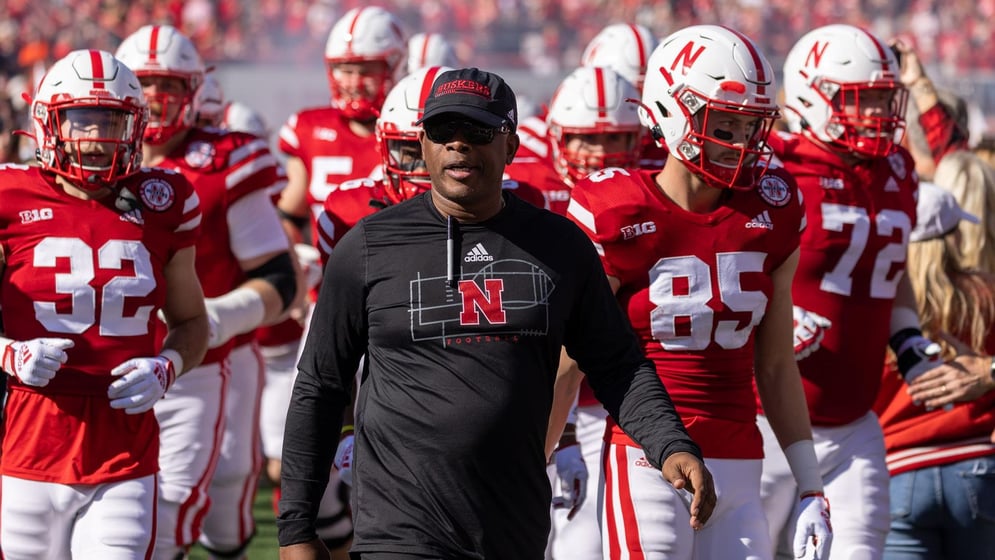 Joseph discussed the focus of the team and coaching staff.

"The boys have been great," he said. "The coaches have been great. We came in on Sunday, and we talked about our mistakes and cleaning it up because it is a copycat league. Then, we said we are going to put it on the 24-hour rule and get ready for Minnesota. You have to put losses behind you. We cannot let Illinois beat us twice, so we had to be ready for Minnesota this weekend. The boys did a great job of putting it behind them."

Joseph also talked about the Go Big Project and how it will benefit the program.

"I think any time you have a facility of that magnitude, I think it is great for the University and it is also great for the program," Joseph said. "It helps you with your players because everything is in-house. It also helps you in recruiting because kids want to see nice things. They want to see nice things because that is the generation, but I think it gives you a lot of energy heading forward in the future."

The Huskers will kick off against Minnesota at 11 a.m. (CT) at Memorial Stadium. The game is set to be on radio. Coverage provided by Huskers Radio Network.

Huskers to Honor Veterans and Active Duty Military on Saturday

At Saturday's game against Minnesota, Nebraska Athletics will salute all Veterans and active-duty military in attendance. The annual Military Appreciation game is in observation of Veterans Day on Friday, Nov. 11.

Show our veterans that the Huskers stand with them by picking up a new piece of Operation Hat Trick merchandise. Proceeds from the purchase of Operation Hat Trick go to organizations that provide direct services and support to wounded service members and veterans. Fans can shop OHT on Saturday on the east plaza near gate 20 or at the Adidas container store on Stadium Drive. OHT gear is also available at the Nebraska team store or at shop.huskers.com. Other local retailers are also carrying the product.

To commemorate 50 years of Title IX, Nebraska will celebrate a trailblazer in women's athletics at every home football game. Maurtice Ivy will be recognized and honored during the Minnesota game this Saturday.

Title IX of the Civil Rights Act was signed into law on June 23, 1972, when Ivy was just a 5-year-old growing up in Omaha. She spent her elementary and junior high days on the cement courts at Fontenelle Park, across the street from her home, taking on boys in the neighborhood. The playgrounds and gyms of Omaha became the proving grounds of her talents.

So did the football field, where she spent five seasons playing middle linebacker for her father and football coach, Tom, for the Gate City Steelers. Her mental and physical toughness allowed her to become the first middle schooler to compete on varsity at Omaha Central.

After graduating from Omaha Central at age 16 in 1984, Ivy came to Nebraska to help turn around a struggling program. She scored nearly 2,000 points during her career at Central, leading the Eagles to a pair of Class A state titles and 50 consecutive victories. She led the state in scoring three times and led the Metro Conference four straight seasons.

The Omaha World-Herald and Lincoln Journal Star chose her as its 1984 high school athlete of the year after she helped Central's track and field team to a pair of state championships as well, winning a half-dozen gold medals of her own along the way.

After getting offers from hundreds of schools, Ivy made the Devaney Center her home to show the world her athleticism.

She was recruited to Nebraska by first-year hed coach Kelly Hill, who led the Huskers for Ivy's freshman and sophomore seasons. NU suffered through two losing campaigns despite Ivy's explosive production. Coach Angela Beck arrived for Ivy's junior season, and the fortunes of the Huskers changed.

The Big Red fought its way to a winning season in 1986-87 that included a trip to the semifinals of the Big Eight Tournament.  Ivy set the tone for Nebraska's ascension by averaging a then-school-record 23.6 points per game.

The Huskers fully arrived in Ivy's senior season. Nebraska, which had never finished better than fourth in the Big Eight standings, sprinted to the 1988 conference regular-season title with Ivy averaging 19.1 points, 6.1 rebounds and 3.8 assists.

"For sure I was a shooter and a scorer, individually you can do some things but you can't do it without your team," Ivy said in the recent Nebraska Public Media production commemorating Title IX. "We bonded and we gelled and we went to work."

The first women's basketball player in school history to score 2,000 career points, Ivy achieved the milestone on "Maurtice Ivy Night" at the Bob Devaney Sports Center. Mayor Bernie Simon declared it "Maurtice Ivy Day"in Omaha on Feb. 17, 1988, and Ivy showed her flair for the dramatic by sinking a free throw with 23 seconds left to put the Huskers in front while reaching 2,001 career points. She added three more free throws to give NU a 76-72 win over a Kansas team they had beaten just three times in the previous 22 meetings. The same day, Omaha Central announced the retirement of her No. 22 jersey.

In January of 2011, Nebraska retired Ivy's No. 30 jersey and the banner displaying it hangs next to 1993 Wade Trophy winner Karen Jennings' No. 51 and All-American Kelsey Griffin's No. 23 inside Pinnacle Bank Arena.

Ivy's rebounding and block totals might be the best examples of her remarkable athleticism. At 5-9, Ivy played at the rim, soaring above taller players to finish at the iron or flying across the lane in help defense to block shots. As a sophomore in 1985-86, she averaged 8.6 rebounds to go along with 19.7 points. As a junior, she added 7.8 boards to her 23.6 points.

After setting the stage for success at Nebraska, Ivy also became a trailblazer as a professional, spending two years in Denmark. She continued to find ways to compete while completing her bachelor's degree in communication from Nebraska in 1992.
She was a national-level competitor on some dominant "Hoop It Up" teams when the street game swept the nation in the 1990s.

In 1993, she led the Nebraska Express in the Women's Basketball Association. In the three official seasons of the WBA (1993-95), Ivy was a true star in the summer league that helped lay the foundation for the WNBA. In 1994, Ivy led the Express to the WBA title as the Finals MVP. In 1993, Ivy powered the Express to a league-best 13-2 regular-season record before falling in the best-of-five WBA Championship series to the Kansas Crusaders.

In 1996, Ivy and another former Omaha Central standout, Jessica Haynes, powered a team to a "Hoop It Up" national title.

"I do think I've been a pioneer for women's basketball," Ivy told Omaha journalist Leo Biga. "I am always flattered when they compare players coming up now to me."

She added a master's degree in health, physical education and recreation from UNO, where she was an assistant women's basketball coach. She was also a head coach at Peru State.

She has served as a senior executive at the Charles Drew Health Center in Omaha since 2013 and is the CEO of the non-profit Ivy League Youth Sports Academy in Omaha.

"I recognize the significance of Title IX and the impact it has had on my life," Ivy said. "Success breeds success. It does something for your confidence as a young girl, and as a woman."