Both Chadron State and South Dakota Mines will be wrapping up their football seasons Saturday while playing in Rapid City with a noon kickoff.
Thursday, November 10th 2022, 3:31 AM MST
By Chadron State College 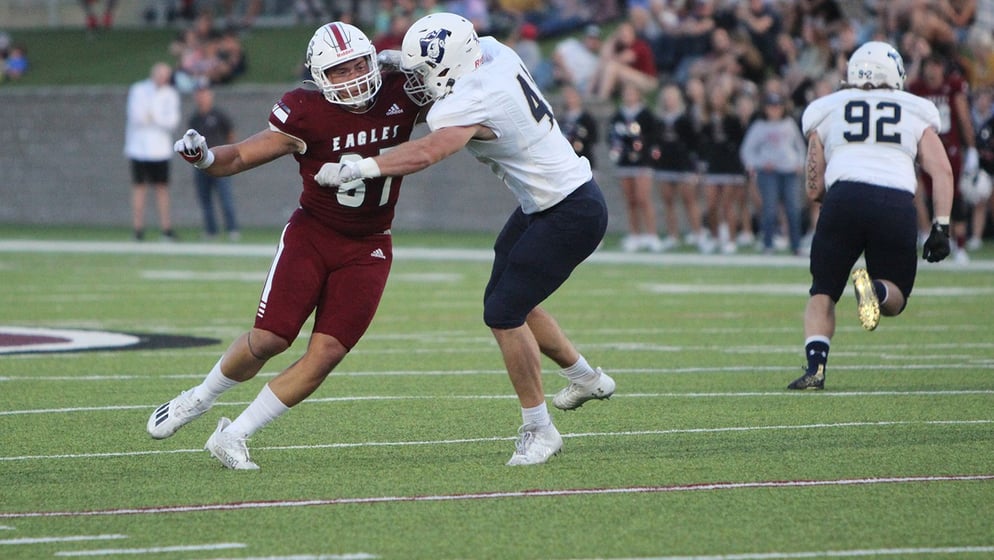 CHADRON, Neb. -- November 9, 2022 -- Both Chadron State and South Dakota Mines will be wrapping up their football seasons Saturday while playing in Rapid City with a noon kickoff.

The winner will receive the Eagle-Rock Trophy. That, along with both teams wanting to finish on a winning note, is expected to make the game a spirited affair.

Both teams are coming off disappointing losses. While Chadron State had 24-3 halftime lead over Colorado Mesa at home on Saturday, the Mavericks won 38-37 in overtime.  The Hardrockers, meanwhile, visited CSU-Pueblo, trailed 24-7 at intermission and did not rally, losing to the ThunderWolves 45-20.

Much like Mesa, the Hardrockers are a "throw-first, run-once-in-a-while," team.  Their calling card is quarterback Jayden Johannsen, who has been the RMAC's Offensive Player-of-the-Week three times this fall while clicking on 200 of 320 passes (62.5%) for 2,710 yards and 24 touchdowns and throwing only five interceptions.

Johannsen also is the team's top rusher with 120 carries for 489 yards after 152 yards have been deducted when he was sacked. Neither of the team's two leading running backs has picked up 300 yards.

Transfer Heath Beemiller, who will be making his seventh start at quarterback after missing four games in the middle of the season because of injury, has completed 94 of 173 passes (54.3%) for 955 yards.  True freshman Tommy Thomas has caught the most passes—30 for 333 yards.  Another wideout, Ahlonte Hair, has 25 for 385 and tight end Peter Krohn has 25 for 265.

The CSC-Mines rivalry dates back to 1912, the second year Chadron State was operating.  The Eagles have won each of the last 15 clashes dating back to 1988 and all seven since the rivalry was renewed in 2016 when the Hardrockers joined the RMAC.

Most of the recent games have been high-scoring, knock-down, drag-out affairs. Three of them have been decided by five or fewer points. They include the 2018 game that the Eagles won 50-46 by recovering a Mines fumble on their own one-foot line on the final play and the 2019 contest when the lead changed hands eight times before the Eagles prevailed 53-48.

The teams combined for more than 1,000 yards of total offense in both of those games.

Last year, when the rivals met at Elliott Field in Chadron for a night game on Sept. 18, the Eagles won 31-21 while compiling 493 yards of total offense and converting on 11 of 15 third downs. Mines finished with 284 yards of total offense with Johannsen completing 18 of 31 tosses for 166 yards and running for 72 yards.

The RMAC honors all players in their second year or later with their current school, with a 3.30 or better cumulative grade point average. This year, the Academic All-RMAC First Team, which is voted on by the league's sports information directors, required a 3.5 or better.

Three seniors, three juniors, and two sophomores are among the CSC players named.

The Academic Player of the Year was awarded to Colorado Mesa University's Sabrina Vandelist.

Nominees must meet the GPA requirement as well as have a full year in residence at their current school.

Aguallo, a redshirt freshman, played in six games at running back, carrying 24 times for 143 yards and a touchdown. He added one reception of 11 yards. His 73 yards and a score at Fort Lewis on October 8 were season highs. Aguallo has a 4.0 in business.

Also a redshirt freshman, Eisenbraun began the season as starting punter before an injury sidelined him. He punted 38 times in five games for an average of 38.7 yards per punt, landing kicks of 50 yards or more in four of five games. Nine of his punts pinned the opponent inside their 20-yard line, and four were touchbacks. Eisenbraun carries a 3.91 GPA in fitness and wellness.

Twenty other players earned spots on the All-Academic honor roll, by virtue of their GPAs above 3.30.

The RMAC Academic Players of the Year were John Matocha of Colorado School of Mines, for offense, and Ryder Blair of Black Hills State, for defense.