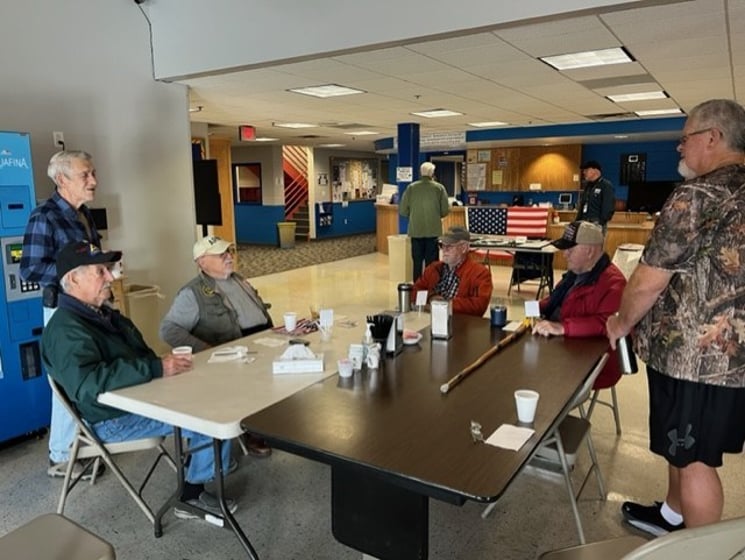 Veterans were invited to a morning social at the Cheyenne County Community Center Thursday in honor of U.S. Marine Corps' anniversary and Veterans Day.

Panhandle communities are celebrating the anniversary of the U.S. Marine Corps and Veterans Day this week.

Today started with the Cheyenne County Community Center inviting veterans and specifically Marine veterans to celebrate this morning at the Center.

Veterans were encouraged to meet over coffee and snacks at the entry to the Community Center. The celebration recognized the founding of the U.S. Marine Corps and Veterans Day Friday.

Also today, Cabela's retail store in Sidney is celebrating veterans. The location will host a display of uniforms and cake will be available for veterans.

Friday starts with Western Nebraska Community College's Sidney campus honoring veterans 11 a.m. to 1 p.m. Friday also includes the annual ham and beans and cornbread feed at the Sidney Elks Lodge. The event is scheduled for 5 p.m. to 7 pm. All veterans are welcome free of charge.

History of the U.S. Marine Corps: The U.S. Marine Corps traces its roots to Nov. 10, 1775, when  the Second Continental Congress passed a resolution stating that "two Battalions of Marines be raised." This resolution established the Continental Marines and marked the birth date of the United States Marine Corps. These first Marines distinguished themselves in a number of important operations, including their first amphibious raid into the Bahamas in March 1776.The Treaty of Paris in April 1783 brought an end to the Revolutionary War. The Continental Navy and Marines were disbanded with the sale of the Navy's ships.

After the Marine Corps was re-established and on July 11, 1798, they saw action with France, including many operations against the Barbary pirates. The Marine Corps was active in the War of 1812, the Mexican War, the Spanish-American War and protecting American interests to this day.

Veterans Day traces its history to 1921. An unknown World War I American soldier was buried in Arlington National Cemetery that year. This site, overlooking the Potomac River and the city of Washington, D.C., became the focal point of reverence for America’s veterans.

"Similar ceremonies occurred earlier in England and France, where an unknown soldier was buried in each nation’s highest place of honor (in England, Westminster Abbey; in France, the Arc de Triomphe). These memorial gestures all took place on November 11, giving universal recognition to the celebrated ending of World War I fighting at 11 a.m., November 11, 1918 (the 11th hour of the 11th day of the 11th month). The day became known as “Armistice Day,” according to the U.S. Department of Veterans Affairs.

In 1926, the celebration was named Armistice Day through a Congressional resolution in recognition of November 11, giving universal recognition to the celebrated ending of World War I fighting at 11 a.m., Nov. 11, 1918 (the 11th hour of the 11th day of the 11th month). The day became known as “Armistice Day.” , and by 1947, it was called Veterans Day.