The Merino girls volleyball team has added yet another chapter to its legacy.
Sunday, November 13th 2022, 8:14 PM MST
By Press Release 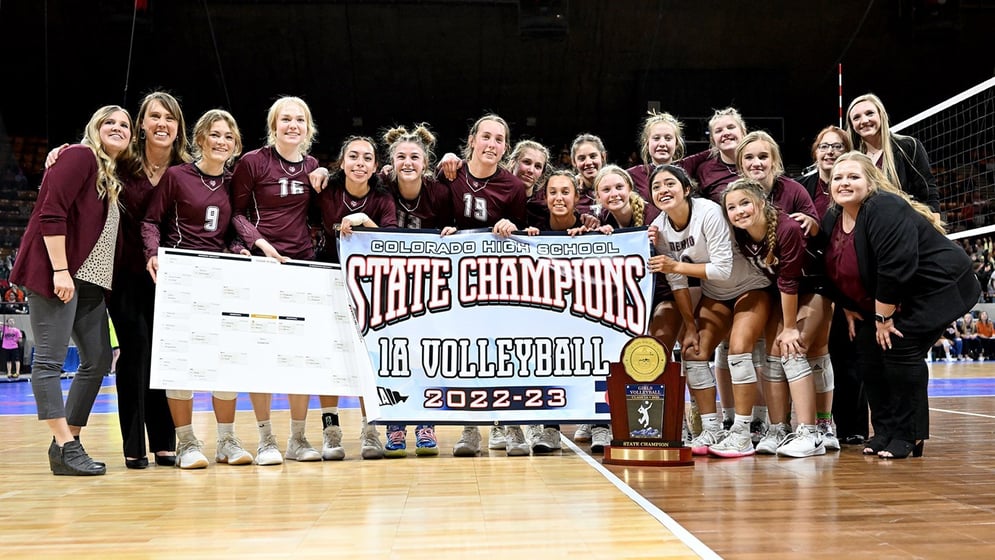 DENVER – The Merino girls volleyball team has added yet another chapter to its legacy.

The top-seeded Rams swept their Class 1A state championship match with No. 4 Fleming at Denver Coliseum on Saturday night to be crowned the state champions for the third consecutive season.

“It’s an amazing feeling,” Merino junior Makenna Sutter said. “To win it with a new team and new girls. It’s great that we have overcome our challenges to win it each year.”

Merino won the match 25-17, 25-21 and 25-14 and revenged its earlier loss to the Wildcats – who defeated them in the quarterfinals on Friday.

“I don’t even know what to say,” said Merino coach Christin Sutter. “I’m honored and blessed to coach such a great group and to just be part of such an awesome community.”

It was déjà vu of sorts for the two squads that have faced off in the state-championship match each of the previous three state volleyball tournaments. And to say the two teams know each other very well would be an understatement.

The two have played each other four times this season, including twice in the tournament. Merino won three of the matches, including the all-important title match.

When the two squads faced off in the quarterfinals Fleming took control early, but the Rams weren’t going to allow that to happen again.

“It is so hard to play each other all the time,” coach Sutter said. “We know each other so well. They are a formidable opponent for sure.”

Fleming gave Merino fits in the quarterfinals and the Rams new they needed to adjust when it came to the title match.

Merino came out energized early, taking control of the first set. But Fleming answered with an early 7-4 advantage in the second set, but once again Merino didn’t lose its swager and closed out the second set and came roaring back to take the third set. With the trophy within their grasp, the Rams dominated the third set and celebrated the victory.

“I was super impressed with the level of calmness they played with – especially with how young they are,” the coach said. “They just came ready to play and I’m very proud of them.”

It was the first three-peat in Class 1A volleyball team since Flager High School won the championship from 1994-1996.