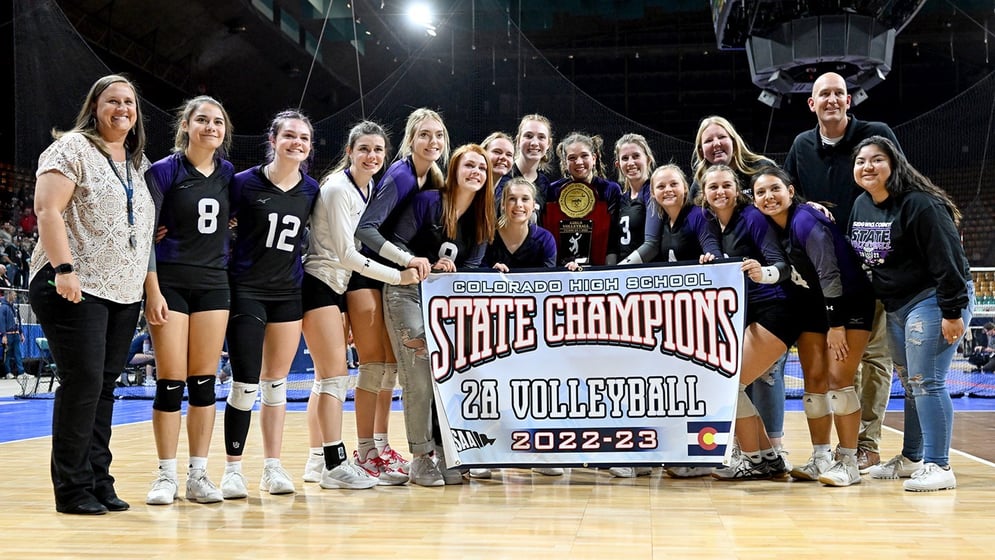 “I really didn’t know what to expect,” Renquist said. “I’m just so proud of our team and how they battled through. We had faith that they could pull it out and they did just that.”

Just like last season, No. 2-seeded Sedgwick didn’t lose a match at the tournament. They swept their first two matches against Denver Christian and Meeker and beat Wiggins in the semifinals in four sets.

“It’s amazing,” senior Jensen Renquist said. “We lost a lot of people from last year and to come back and win a state championship again it is just so amazing. We knew Fowler was going to be tough, but we also know how good of a team we are and we weren’t going to let them beat us.”

It was the battle of the unbeatens in the state-championship match. Fowler won all three of its matches at the state tournament going into Saturday night. The Grizzlies beat No. 12 Hoehne in straight sets and defeated top-seeded Wiggins in five and No. 3 Meeker in four. And they also didn’t make it easy for the Cougars in the championship match.

Led by 5-foot-10 senior Claire Johnson, Fowler played Sedgwick tight during the first two sets. Johnson picked up a couple of key kills and helped Fowler win the second set by two points.  After Sedgwick won the third set, Fowler took control early in the fourth set and led 21-18 late but Sedgwick scored the final seven points of the match to seal the victory and its second consecutive state championship.

“That’s who we are. I’m just proud of our team,” Alissa Renquist said. “We weren’t playing clean early and had some mental lapses but give Fowler credit. They are a tough competition, and they know how to place the ball, but our girls responded well and took care of business.”

Sedgwick finished the season with a 26-2 record overall, with its only two losses coming to Wiggins and Merino early in the season. The Cougars ended the season winning their final 11 matches.