Eagles notes: O'Connor picked as RMAC Player of the Week 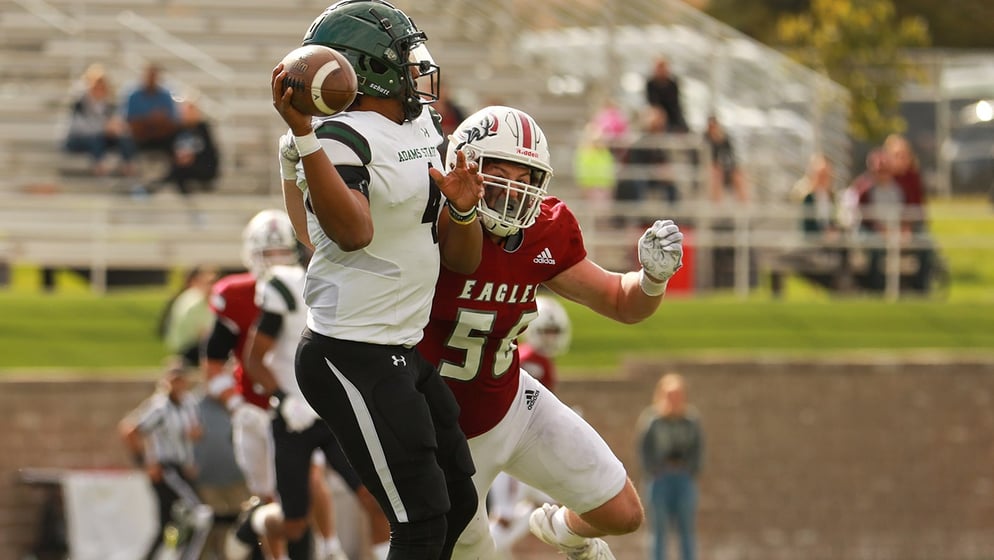 O'Connor had an exceptional game at South Dakota Mines on Saturday. He set a new RMAC single-game record with 9.0 tackles for loss, for a total of 39 yards. He also broke the CSC school record for sacks in one season, passing RMAC and CSC Hall of Famer Casey Beran with 16.0 sacks this fall, after racking up five on Saturday. Of O'Connor's 13 total tackles, 12 were solo, including all five sacks and all nine tackles for loss. The five sacks were the second-best ever recorded in an RMAC game.

The Legacy High grad is now No. 2 in NCAA Division II for sacks per game, and tied for No. 3 in tackles for loss per game.

O'Connor is the second Eagles player tabbed for the conference's weekly honors, after placekicker Gunnar Jones on October 17.

She finished seventh in the conference for blocks per set, with 0.95 this fall. She played five-set matches at South Dakota Mines and at home versus Fort Lewis, where she recorded 11 and 12 total blocks, respectively. She also had the highest single-match hitting percentage on the team, swatting at a clip of .571 against New Mexico Highlands in the Chicoine Center.

It is the ninth consecutive season that CSC has had at least one player honored in the annual postseason release.

Campbell, a native of Tifton, Ga., who transferred from North Iowa Area Community College, was in the starting lineup on Sunday when the Eagles faced off with the No. 1-ranked Lopers of Nebraska-Kearney. In the 133-pound class, he went up against Jordan Kelber, a former three-time state champ from Valentine and a grad transfer from the University of Nebraska Lincoln. Campbell started strong, reeling off nine unanswered points until he caught his opponent in a pin with 43 seconds remaining in the second period.

The fall, worth six team points, put the Eagles up 10-0 on the defending national champs. The Lopers recovered down the stretch to win 24-13.

Campbell was an All-America honorable mention last year for NIACC, where he placed fifth at junior college nationals at 141 pounds.

Eagles wrestlers on the road again this week

CHADRON, Neb. -- November 16, 2022 -- The Chadron State College men's wrestling team has three competitions lined up for this week, both on the road.

The first two will be on Thursday, November 17. The Eagles will travel just over the state line to Sterling, Colorado, for two junior college duals in the afternoon. They wrestle Northwest College, of Powell, Wyoming, at 3 p.m., and take on host Northeastern Junior College following the first dual meet.

Northeastern is ranked 11th in the NJCAA coaches poll, while Northwest is No. 17.

The Northwest Trappers hosted their own open meet on November 5, and then defeated Northwest Kansas Technical College 28-21, at a neutral site in Rock Springs, Wyoming.

The Northeastern Plainsmen lost a 43-6 decision at Western Colorado, and then competed at the last two open meets that CSC attended, the Mines Rookie Open and the Cowboy Open.

CSC defeated the Plainsmen in the season opener in Chadron last year, by a 43-0 margin. They have not seen Northwest in a dual meet at all, in the past decade.

Following the two duals will be a trip back to Kearney for the Younes Hospitality Open, at the Buffalo County Fairgrounds. The Eagles will enter nearly 30 wrestlers in the massive tournament, which so far 29 teams have registered for.

At last year's open, Darwin Hull, then a freshman, placed fifth at 174 pounds, while sophomore Harrison Gocke was sixth at 149. However neither wrestler was able to compete all the way through the bracket, as every competitor is limited to six matches. Rarely does anyone other than the finalists find out where they would have placed without the limit.

The dual lineup for CSC: