After not having played a game since Dec. 9, the Chadron State College basketball teams are slated to get back in the swing of things with a hectic schedule that begins Saturday afternoon, or New Year's Eve, in the Chicoine Center.
Thursday, December 29th 2022, 8:49 PM MST
By Chadron State College 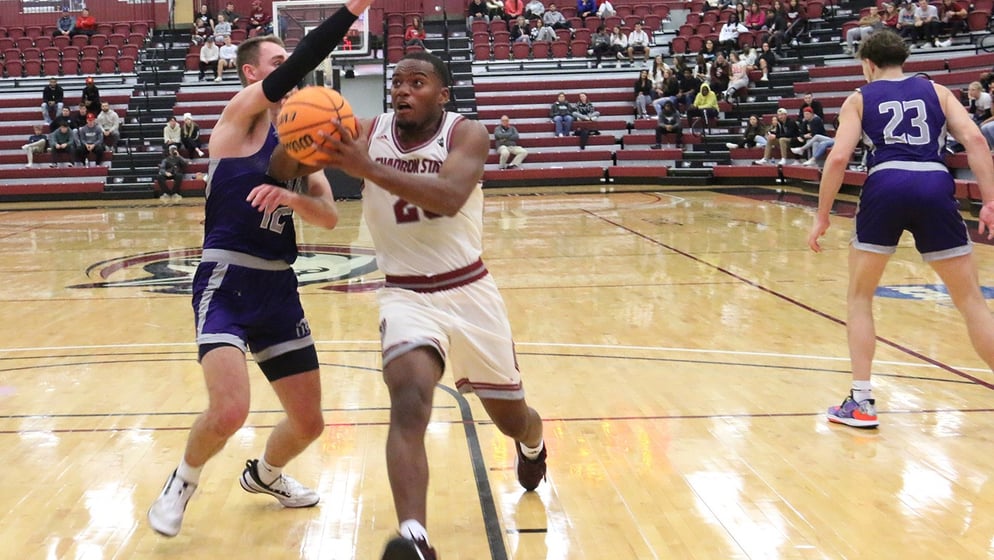 CHADRON, Neb. -- December 29, 2022 -- After not having played a game since Dec. 9, the Chadron State College basketball teams are slated to get back in the swing of things with a hectic schedule that begins Saturday afternoon, or New Year's Eve, in the Chicoine Center.

Both teams are to host Metro State with the women's game to tip off at 2 o'clock and the men's contest about two hours later.

That's the start of a busy four-day slate.  The Eagles won't play on Sunday, and that's good since the other games are on the road.  They'll meet the Regis Rangers in Denver on Monday and play at Colorado-Colorado Springs on Tuesday.  All four games also are in the afternoon.

The order will be different than usual at Regis. The men's teams will take the court first.  On Tuesday in Colorado Springs, things will be back to normal with the women playing first.  The double-headers will begin at 1 p.m.

The situation is made more dicey because the weekend of Friday and Saturday, Jan. 6-7, the Eagles are to play at Colorado Mesa in Grand Junction and at Westminster in Salt Lake City.  On a positive note, CSC's second semester classes don't begin until Monday, Jan. 9.

The rush job to launch the New Year was caused by the nasty blizzard that struck western Nebraska in mid-December. With all highways and byways in western Nebraska completely blocked by the combination of snow, temperatures sometimes around 20 below and high winds, the Eagles could not travel to the games to be played Friday, Dec. 16 in Denver and Saturday, Dec.17 in Colorado Springs.

They are to be made up Monday and Tuesday.

Thankfully, the Metro State games are in Chadron on Saturday.  Both Metro teams are 4-7 for the season.  The women are 2-3 and the men are 1-4 in the RMAC.

Both Regis and Colorado Springs swept CSC's travel partner, Colorado Christian, in games played the weekend when Chadron State was snowbound.  The Regis men edged the Cougars 81-80 behind guard David Simental's 24 points and the Lady Rangers won 91-84 when five of them scored in double figures.

The Colorado Springs men topped Colorado Christian 92-85 during their Dec. 16 date when 6-8 sophomore Mac Stodart tallied 16 points and three teammates scored 14 apiece. That made their record 9-3 overall and 3-2 in the RMAC.  Three Mountain Lions are averaging about 12 points.

The UCCS women won 72-64 over the Christian Cougars and are 3-9 for the year and 2-3 in the conference. Their other RMAC victory prior to caging the Cougars was by a surprising 71-51 margin over Mesa.

All the other conference teams except CSC have lost at least twice in league play.

Three Eagles, all players that Coach Shane Paben added this year, are scoring in double figures. Isaiah Wyatt leads with a 16.8-point average, followed by Bryce Latimer at 13.8 and Josh Robinson at 11.7.  Returnees Porter Anderson and Marcus Jefferson at 9.2 and 8.5 per game aren't far behind.

The CSC women have struggled. Their record is 1-9. Their victory came over New Mexico Highlands, which was 7-0 at the time, but the Eagles won 89-59 while hitting 33 of 66 field goal shots, including 12 of 22 from behind the arc.  They dropped their last game, played Dec. 9 at Gunnison against Western Colorado, by just 56-54.

Sophomore forward Shay Powers has been a picture of consistency while leading the team is several categories.  They include scoring (16.5), rebounding (6.0) and field goal shooting (53.6% on 67 of 125).

Senior guard Samiyah Worrell has shown signs of getting the groove like she was last year. She was 14-30 from the field, including 9-17 from long range, while scoring 38 points in the last three games.