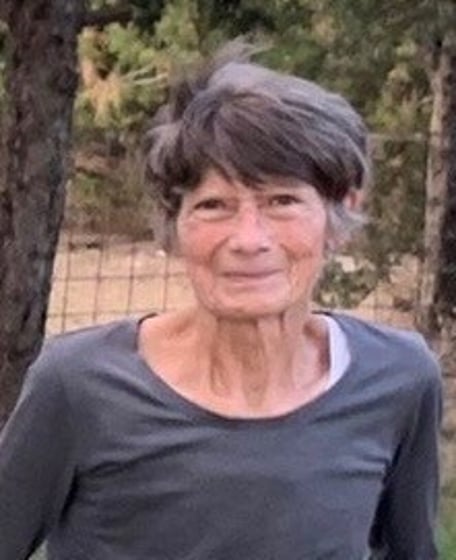 Memorial services will be held at 2:00 p.m. Tuesday, January 3, 2023 at St. Mark's Lutheran Church in Oshkosh with Pastor Scotty Ray officiating.  Services will conclude at the church.

Per Linda's wishes, cremation has taken place and there will be no visitation at the funeral home.

The funeral service will be streamed live via the Holechek-Bondegard Facebook page (https://www.facebook.com/hbfunerals) and available to watch after the service.

Memorials in Linda's name can be made to the Regional West Garden County Foundation designated for the Nursing Home.

Holechek-Bondegard Funeral Home and Cremations in Oshkosh is serving the Dormann and Cooper families.

Family and friends can leave condolences at www.bondegardfunerals.com.

Linda Dormann was born on April 27, 1949 to Albert and Helen Bentley. After a courageous battle with both illness and cancer, she left this world and travelled to her final resting place just as snow began to fall and the sun rose, surrounded by family on December 29, 2022.

She was born in Bridgeport, Nebraska and lived in Lisco, Nebraska until 1988. During that time, Linda attended school in Oshkosh, Nebraska and graduated with a high school diploma. She also underwent schooling to become a stewardess shortly thereafter. She acquired a license to be a stewardess, but life did not allow her to see the world in the way she had originally intended. She never dwelled on her past but rather looked for more opportunities for the best possible experiences.

Linda was united in marriage with Thomas Cooper in 1968. This union was blessed with four children: Greggory, Dagny, Nathan, and Nickola. She concluded her marriage to Thomas in 1983.

Linda was a hardworking woman who dedicated her life to being a mother, friend, and neighbor. Her door was always open. Nothing made her happier than to sit down and share stories as well as get filled in on all the tribulations or triumphs that life brought her friends, family, and neighbors. Linda was strong, caring, understanding, smart, courteous, just a hair stubborn, and above all else, humble.  She believed in people, creating a home where everyone could be welcomed, and always gave everything she could give.

Linda later became married to Ron Dormann in 1987. She moved to Oshkosh, Nebraska in 1988 and lived out the remainder of her life on the Dormann ranch.  She spent most of her life working and being a caretaker for her friends and family. Linda had as many jobs as she could manage to provide for those she cared for. She also spent a good amount of her time helping others get their own work done. Her marriage to Ron lasted until 2003 when she was preceded in death by her husband.

Linda had one sister and four brothers. She was preceded in death by her parents, Albert and Helen Bentley, and her brothers Duane and Rod Bentley.  She is survived by Don (Peggy) Bentley, Diana Fetters, and Fred (Barbara) Bentley. Linda is survived by her four children: Greggory (Amy) Cooper, Dagny (Dirk) Bogaard, Nathan (Cherry) Cooper, Nickola (Jennifer) Cooper, and her step-children Christy Amen, Kerri Gortemaker, Chad Dormann, and families.  She was a proud grandmother of ten grandchildren and two great grandchildren who all survive her. Her grandchildren are Veronica (Caleb) Harris, Martha (Henry) Fowler, Cora Cooper, Luke Bogaard, Max Cooper, Chance Cooper, Aaron Cooper, Sydney Cooper, Sunnie Cooper, and Sugar Cooper. Her two great grandchildren belong to Veronica and Caleb Harris, their names are: Validiana Harris and Virgil Harris.