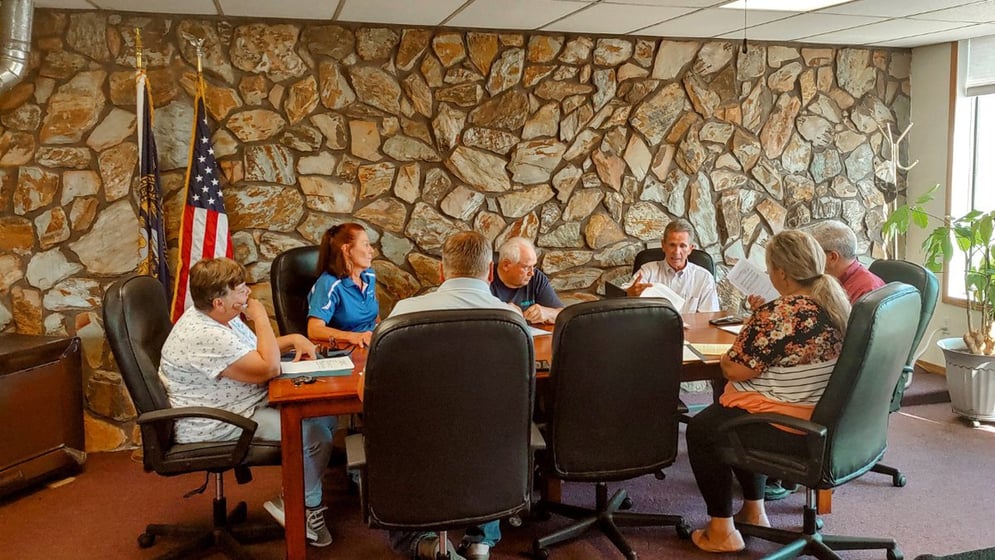 HERSHEY, Neb. (KNOP) - On Monday, the Village Board of Hershey followed in the footsteps of many other communities throughout Nebraska and took their turn in considering an ordinance that would make performing an abortion, aiding or abetting an abortion, and abortion-inducing drugs illegal within the borders of their community.

The measure was brought before the village board as a result of a city initiative petition filed by three Hershey residents: Andrea Foster, Julie Larchick, and Myron Larchick. While the residents needed a total of 73 signatures for the initiative, the petitioners were able to obtain a total of 81 signatures.

The special meeting of the village board had two agenda items for discussion and action: “Resolution 82222: Submitting the measure relating to the adoption by the initiative of ‘An Ordinance Outlawing Abortion, Declaring Hershey a Sanctuary for the Unborn’ to a direct vote of the electors of the Village of Hershey at the next general election” and “Ordinance 82222-1: Outlawing Abortion with the Village of Hershey, Declaring Hershey a Sanctuary for the Unborn.”

The resolution to send the ordinance to the ballot passed 4-1 with board members Thomas Wolfgang, Loren Johnson, Carol Hernandez, and Todd Streeter voting in favor of the measure and board member LeAnn Ellis voting against the measure.

Following the vote to send the ordinance to the ballot, village attorney Doug Stack recommended the board go ahead and vote on the ordinance itself, resulting in a unanimous 5-0 vote against the immediate passing of the ordinance outlawing abortion within the Village of Hershey.

Prior to their vote, board members Carol Hernandez and LeAnn Ellis questioned residents in support of the ordinance on how the ordinance would be enforced. Hernandez also stressed that the village board was nonpartisan and that this issue was a partisan issue. The two female board members also challenged the idea that it was the village’s business to be concerned with the contents of anyone’s mailbox in the village of Hershey.

To answer questions at the meeting was Mark Lee Dickson, a resident from Texas who has been assisting citizens across Nebraska in their attempt to outlaw abortion in their communities. Accompanying Dickson were two female associates from cities that had previously outlawed abortion: the City of Colorado City, Texas which has a population of over 4,000, and the City of Lubbock, Texas which has a population of over 264,000.

Dickson, who has been involved in the passage of 51 local ordinances outlawing abortion throughout the United States, shared that the ordinance would be enforced “the same way that any other ordinance in Hershey is being enforced” and further stated the ordinance serves as a deterrent the same way ordinances prohibiting the use of engine brakes on big trucks serve as a deterrent. Dickson also pushed back against Hernandez’s claim that the measure before them was representing a partisan issue, arguing that a number of registered non-republican voters had signed the petition.

According to Dickson, the reason why Hershey should be concerned about the abortion pill arriving in mailboxes is because of “the Biden Administration’s commitment to abortion access in every zip code” coupled with the deregulation of the abortion pill, also known as RU-486.

While village attorney Doug Stack raised questions regarding the legality of the village of Hershey prohibiting the abortion pill from being shipped into the village from an area outside of their jurisdiction, Dickson argued that communities can and do impose penalties on people who violate local ordinances - even if those who are violating the ordinance are violating the ordinance from afar.

At the end of the meeting, Village Board Chair Thomas Wolfgang gave a passionate speech regarding how he believed the outlawing of abortion was a decision best made in the hands of the people and not five individuals on the village board. The majority of the board agreed, resulting in two separate votes on the measure.

After hearing of the news of the outcome of the meeting chief petitioner Andrea Foster shared, “While I wish our community could have been more like the other communities whose leadership has voted to keep abortion out of their communities, I am thankful that the people will be able to vote on this matter at the ballot box this November.”

Another resident who was in support of the immediate passage of the ordinance was Kevin Hendricks, pastor of Hershey Baptist Church. Unlike board member Carol Hernandez, Pastor Hendricks did not see the matter as a partisan issue. Hendricks shared, “A little over fifteen years ago my wife miscarried at six weeks. We grieved deeply and I’m still sad that I never got to know that child. But we didn’t grieve the loss of a fetus, we grieved the loss of our CHILD. When a woman miscarries it is a child that is lost. This fight is for the lives of children, not fetuses.”