Kyle Vantrease scored on an 8-yard run with 36 seconds left after Nebraska had taken its first lead, and Georgia Southern beat the three-touchdown-favorite Cornhuskers 45-42.
Saturday, September 10th 2022, 10:32 PM MDT
By The Associated Press 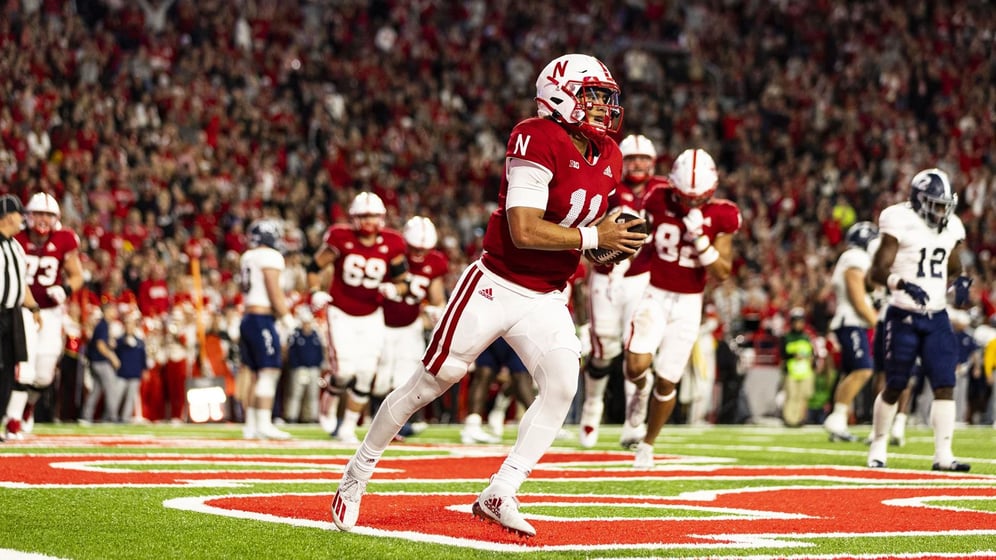 Casey Thompson had a hand in four of Nebraska's touchdowns against Georgia Southern.
NU Athletic Communications

The Huskers’ Timmy Bleekrode was wide left with a 52-yard field goal attempt as time ran out and Georgia Southern players ran onto the field to celebrate the program’s first win in 13 games against Power Five opponents.

The loss turns up the pressure on embattled Nebraska coach Scott Frost, who now faces a home game next week against No. 7 Oklahoma.

Lincoln - Nebraska's offense rolled up 575 yards of total yards, but Georgia Southern answered with 642 offensive yards in a 45-42 win over the Huskers at Memorial Stadium on Saturday night.

The Eagles (2-0) scored the go-ahead touchdown on quarterback Kyle Vantrease's eight-yard run with 36 seconds left. Casey Thompson then moved Nebraska quickly into field goal position. His pass to Trey Palmer with one second left, set up a 51-yard field goal attempt by Timmy Bleekrode, which would have forced overtime. But Bleekrode's kick spun wide left, dropping Nebraska to 1-2 on the young season.

Nebraska's first non-conference loss came despite a strong night from Thompson, who completed 23-of-34 passes for 318 yards and a touchdown. He rushed 10 times for 31 yards and three touchdowns, including Nebraska's go-ahead score with 3:05 left that made it 42-38 Huskers.

Palmer hauled in six receptions for 81 yards, while Marcus Washington led the Husker receiving corps with 123 yards on six catches of his own.

While Thompson moved the Huskers through the air and on the ground, running back Anthony Grant added his third consecutive 100-yard rushing game to open his Nebraska career. Grant rushed for a game-high 138 yards on 27 carries, including a touchdown, while Ajay Allen added 76 yards and a score on just eight carries.

On a night when both offenses dictated the tone and tempo of the game from start to finish, the Eagles answered with Vantrease's touchdown run to cap an 11-play, 75-yard drive that took 2:29.

Vantrease, who previously led a Buffalo team on the field at Memorial Stadium, put up huge numbers by completing 37-of-56 passes for 409 yards and a touchdown. He also threw a pair of interceptions while adding two carries for seven yards on the ground.

The Eagles added 233 rushing yards, including 132 yards from running back Gerald Green on just 10 attempts with two touchdowns. Jalen White pitched in 18 yards on 17 carries with two more scores.

Georgia Southern outscored Nebraska 17-14 in the second half, and 10-7 in the final quarter.

Defensive back Marques Buford Jr. provided highlights for the Nebraska defense with a pair of interceptions to go along with his five tackles. Isaac Gifford led Nebraska with 11 total tackles, while Luke Reimer and Stephon Wynn Jr. each pitched in nine stops.

After a high-scoring first half, the two teams went to the locker room tied at 28 after combining for 689 yards of total offense on 83 snaps. Thompson completed 13-of-16 passes for 202 yards and a touchdown in the opening half, while adding six carries for eight yards and two more touchdowns on the ground. Grant added 75 yards rushing and another scoring on 14 first-half carries, while Allen pitched in 38 rushing yards on five totes.

Nebraska rolled 325 total yards in the half, including Brody Belt's first career touchdown catch, a 21-yard connection with Thompson to tie the score at 14 early in the second quarter. Just over five minutes later, Grant gave the Big Red its only lead of the half on his four-yard touchdown run with 8:25 left in the half to make it 21-14 Huskers.

Georgia Southern then answered with back-to-back touchdown drives in a 3:27 span to regain a 28-21 edge. Green, who had 120 yards on five carries for the Eagles in the first half, scored on runs of 1 and 47 yards.

Thompson answered for the Huskers on their final drive of the half, capping a six-play, 75-yard drive with his two-yard touchdown run.

Vantrease led the Georgia Southern offense with 185 yards on 19-of-26 passing but did throw one interception in the half. The Eagles put up 364 yards of total offense including 179 on the ground in the half, but Nebraska closed the second quarter with an important stop after GSU drove inside the Husker 5.

The two teams exchanged touchdowns in the third quarter to send the game to the fourth quarter tied at 35. However, Georgia Southern opened the fourth with 3rd-and-Goal near the Husker goal line. Nebraska's defense held to force a field goal.

Trailing 38-35 with 14:42 left, Nebraska's offense took over but sputtered out of the blocks. Georgia Southern forced a punt and took over at its own 32. The Eagles drove across midfield before Garrett Nelson and Buford Jr. teamed for Nebraska's biggest defensive play of the game. Nelson pressured Vantrease and hit him just as he threw the ball deep down the left side of the field. Buford was in perfect position to secure his second interception of the night to stop the Eagle scoring threat.

Thompson and the Husker offense took over at the NU 2 and proceeded to march 98 yards on 15 plays over the next 5:58, capped by his own one-yard touchdown plunge to give the Big Red a 42-38 lead with 3:05 left.

Nebraska returns home next weekend to complete non-conference action by playing host to Oklahoma. Kick-off between the Huskers and Sooners on Saturday, Sept. 17 at Memorial Stadium is set for 11 a.m., with live national television coverage by FOX, including early pre-game coverage with the Big Noon Kickoff Show. The game can also be heard on the Huskers Radio Network, the Huskers App and Huskers.com.